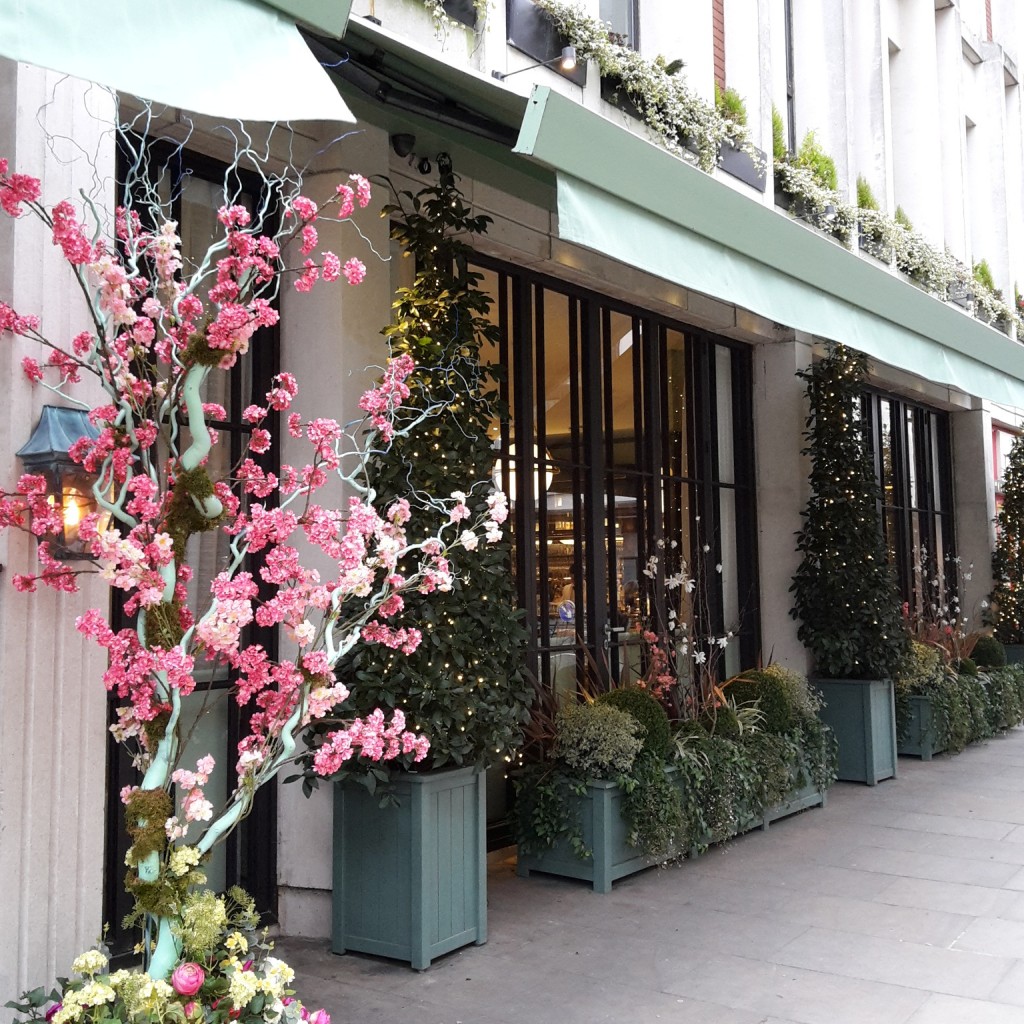 At the weekend we paid a visit to the Ideal Home Show and as we don’t get across to West London that often any more thought it might be nice to stop off for breakfast beforehand on High Street Kensington – mine and latterly Pete’s old stomping ground.

I moved to London just before my 22nd birthday and rented the teeniest, nastiest studio flat just off Earl’s Court Road way back in the earl 2000’s. The day after I arrived, I went for a little walk and stumbled across High Street Kensington and realised I’d probably live in London for the rest of my life.

In total, I spent 8 years within a 10 minute walk of this gorgeous part of London, 4 with a previous boyfriend and then 4 with Pete before he and I decided to head down to south-east London in 2010 in a bid to find something that stood a chance of being able to afford bearing in mind we’re certainly not in millionaire’s league and never will be. We feel very lucky to have spent that time living so centrally though and have many fond memories.

Our original plan had been to head to Patisserie Valerie since I knew they did a range of gluten-free cakes and he could find something cooked. Having parked up at the multi-storey by the Town Hall (and for non-Londoners this will make you gulp, it costs nearly £10 to park for just 2 hours!), we were ambling along High St Ken on a miserable and chilly morning where we were distracted by the beautiful facade of the new-ish (for us anway!) The Ivy Kensington Brasserie.

It describes itself as offering “accessible, sophisticated all-day dining for local residents, businesses, shoppers and visitors. The modern British menu is all-encompassing, including breakfast, elevenses, lunch, afternoon tea, weekend brunch, cocktails, light snacks, and dinner. The Ivy Kensington Brasserie is an oasis for weary shoppers, a haven for local businesses and a constant source of succour for the residents of Kensington, Chelsea and Notting Hill.” 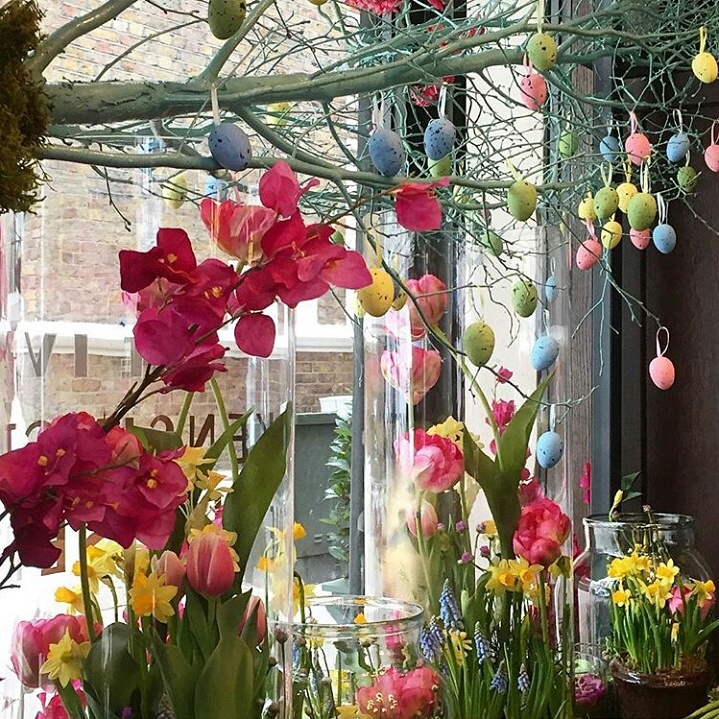 The restaurant looked so inviting with it’s pretty Easter-themed decor and a quick glance at the menu which had such an array of tasty dishes was the decider as we headed inside. Whilst it was early enough for the brasserie to be fairly quiet, the idea is that 40% of tables will always be kept available for walk-in diners rather than needing to make a reservation – a great idea since the original The Ivy restaurant is one of the harder restaurants in London to get a reservation.

Decor-wise, it’s reminiscent of a bygone era – perhaps a place you might have a drink at the bar before boarding the Titanic, or maybe asking Ernest Hemingway if you could join him. Evocative but far from old-fashioned, you can see why it would appeal to the more genteel folk of old-monied Kensington. 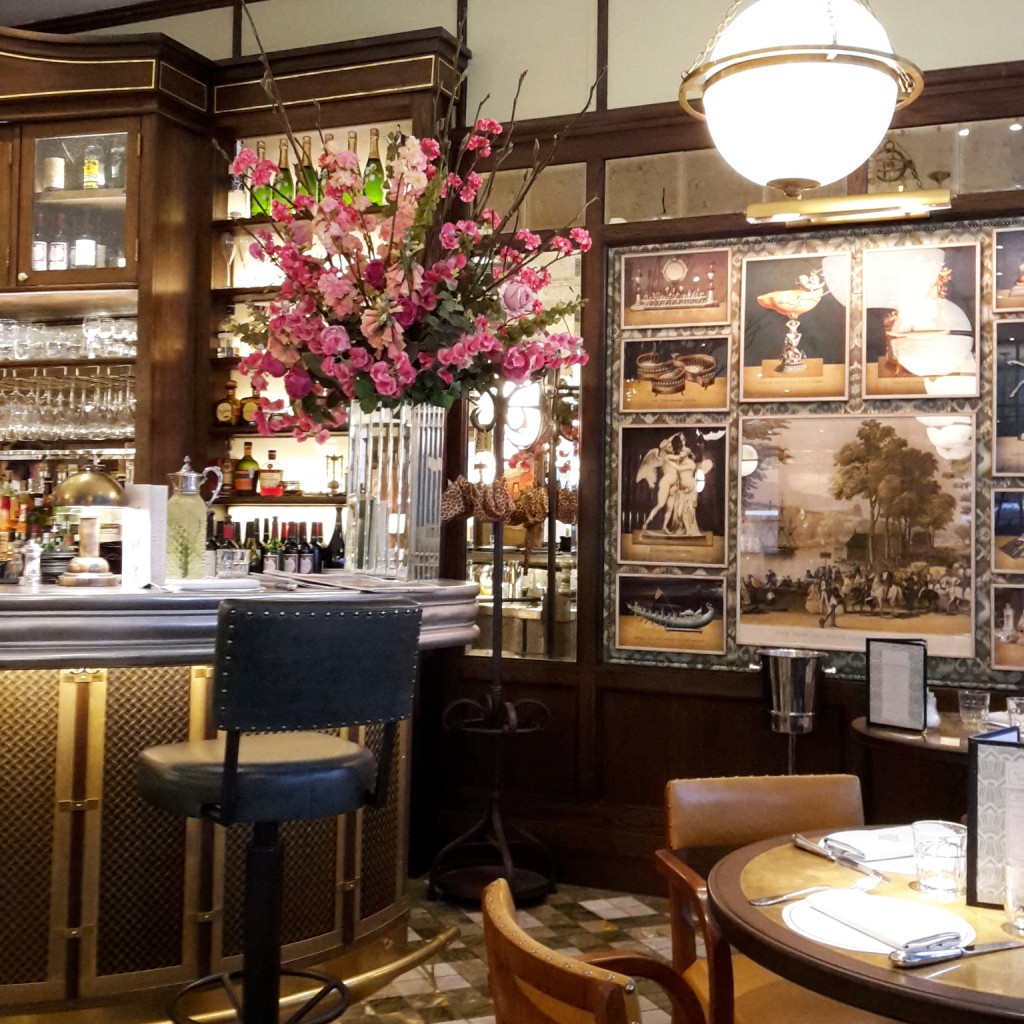 We were offered a booth table or a table by the window and opted for the latter, eager to study the inviting menu. I still feel so unsure of myself when asking about gluten allergies but I’m hoping it will get easier in time. However the helpful waitress advised that any of the breakfast options could be made with gluten-free toast/bread instead of standard and that was perfect for me.

I chose the Eggs Royale – smoked salmon with two poached hen’s eggs on toasted English muffin (or in my case, gluten-free toast) and Hollandaise sauce with of course, what else than a hot chocolate. This drink is my absolute weakness and I must reign in my daily drinking of it! Pete opted for one of the healthy choices on the menu of chopped avocado with roast plum tomatoes, poached hen’s eggs on toasted granary with sesame dressing. 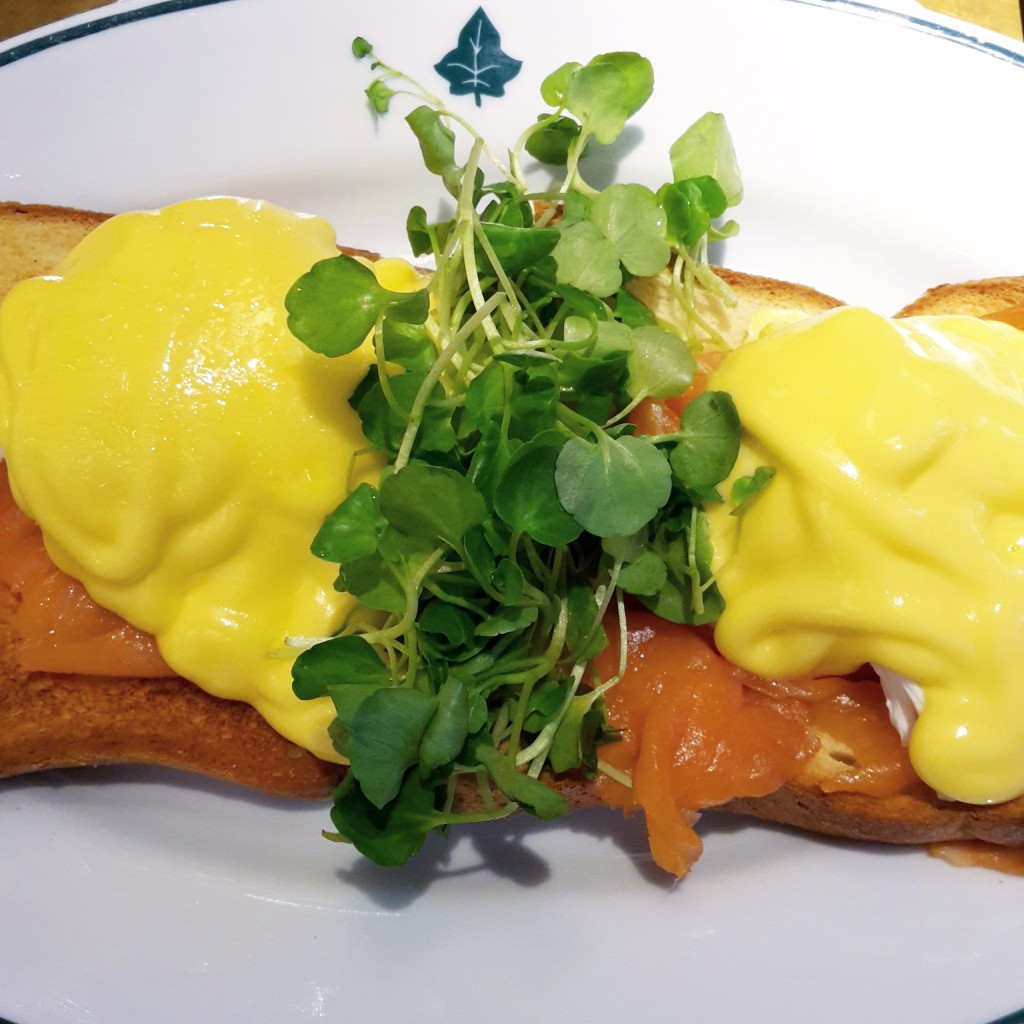 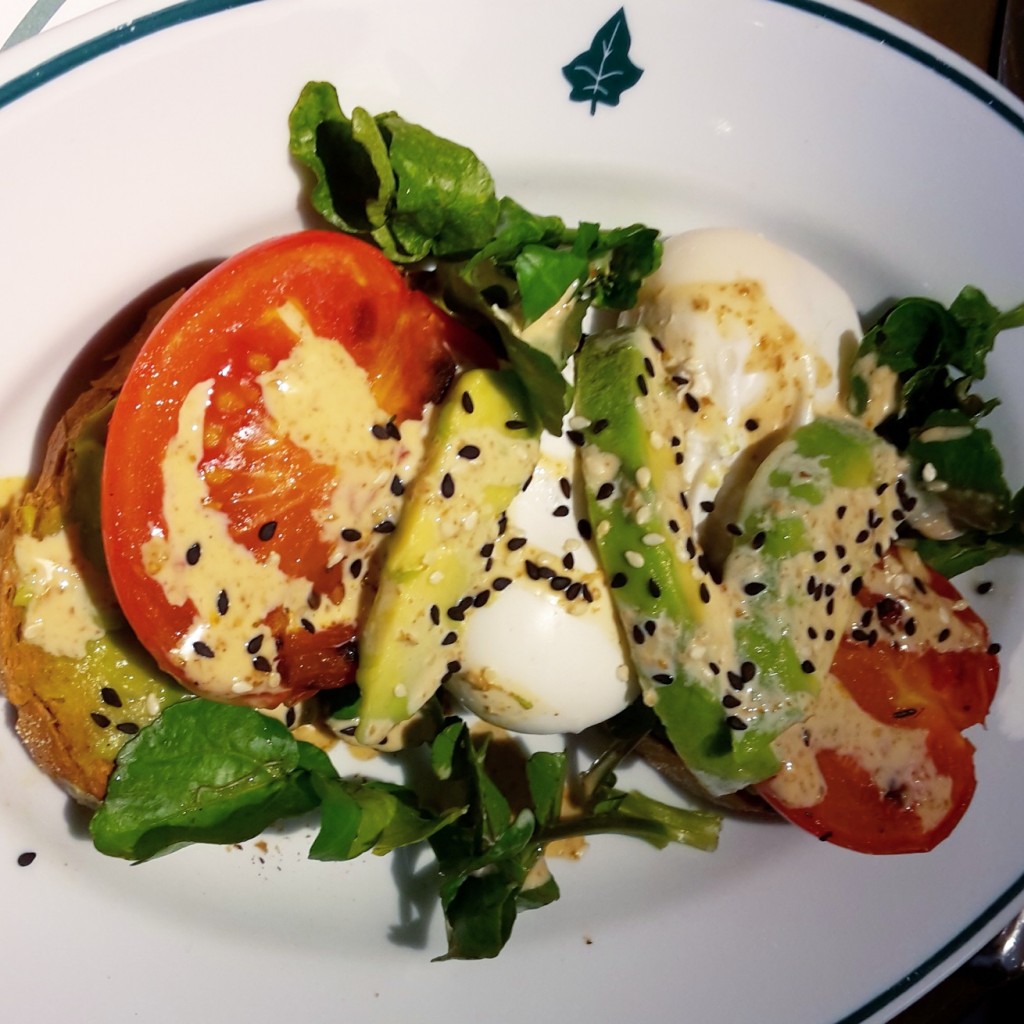 Both dishes arrived beautifully presented and in the end I was defeated and couldn’t finish mine so we both felt the portions were more than generous and served on pretty platters. The winner for me though was the hot chocolate, the first place I have ever been to where the additional little jug isn’t for milk or cream but EXTRA hot chocolate, how amazing is that?! 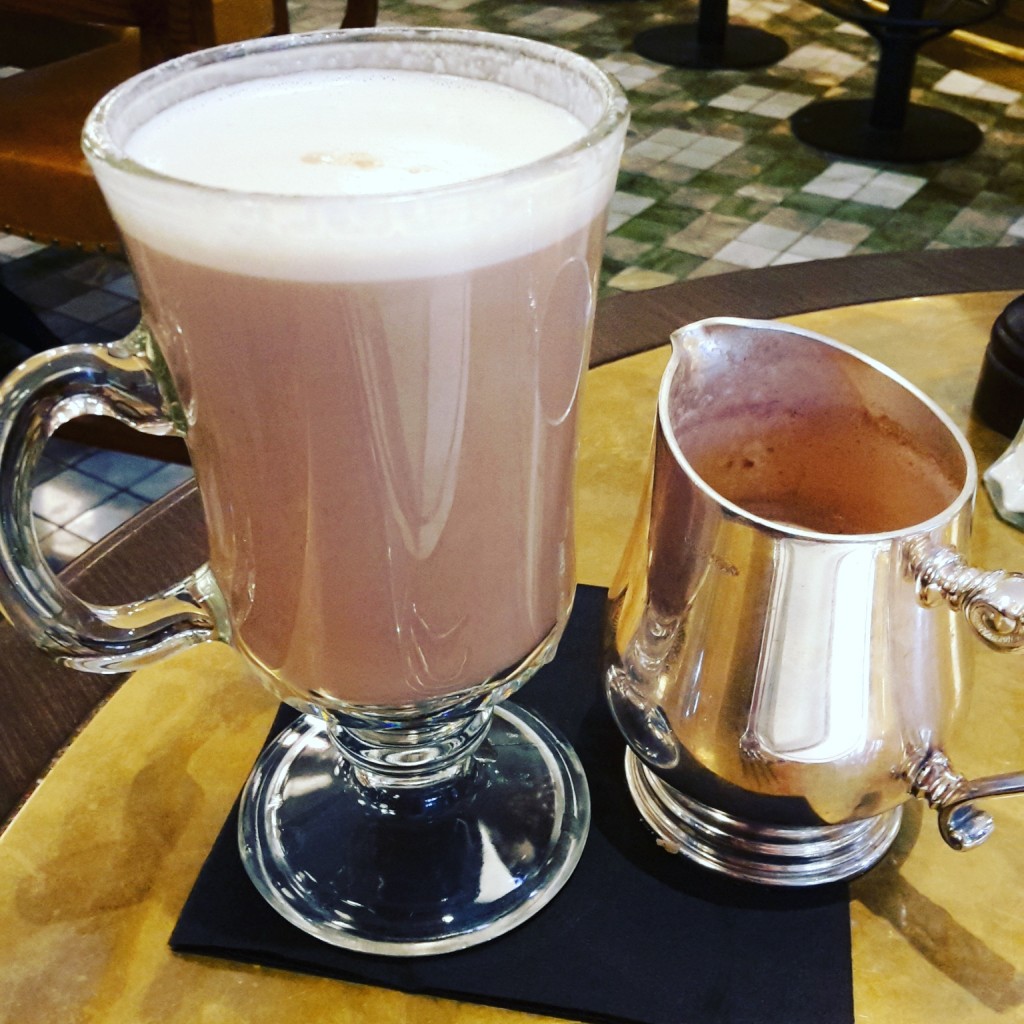 Full to the brim, we settled the bill and headed out into the drizzly Easter Saturday morning – if you find yourself in this neck of the woods, it’s a wholehearted recommendation from me. This isn’t a paid for review or something I was asked to do for the blog, just a wonderful little start to our day that I felt like sharing. All images my own unless stated.