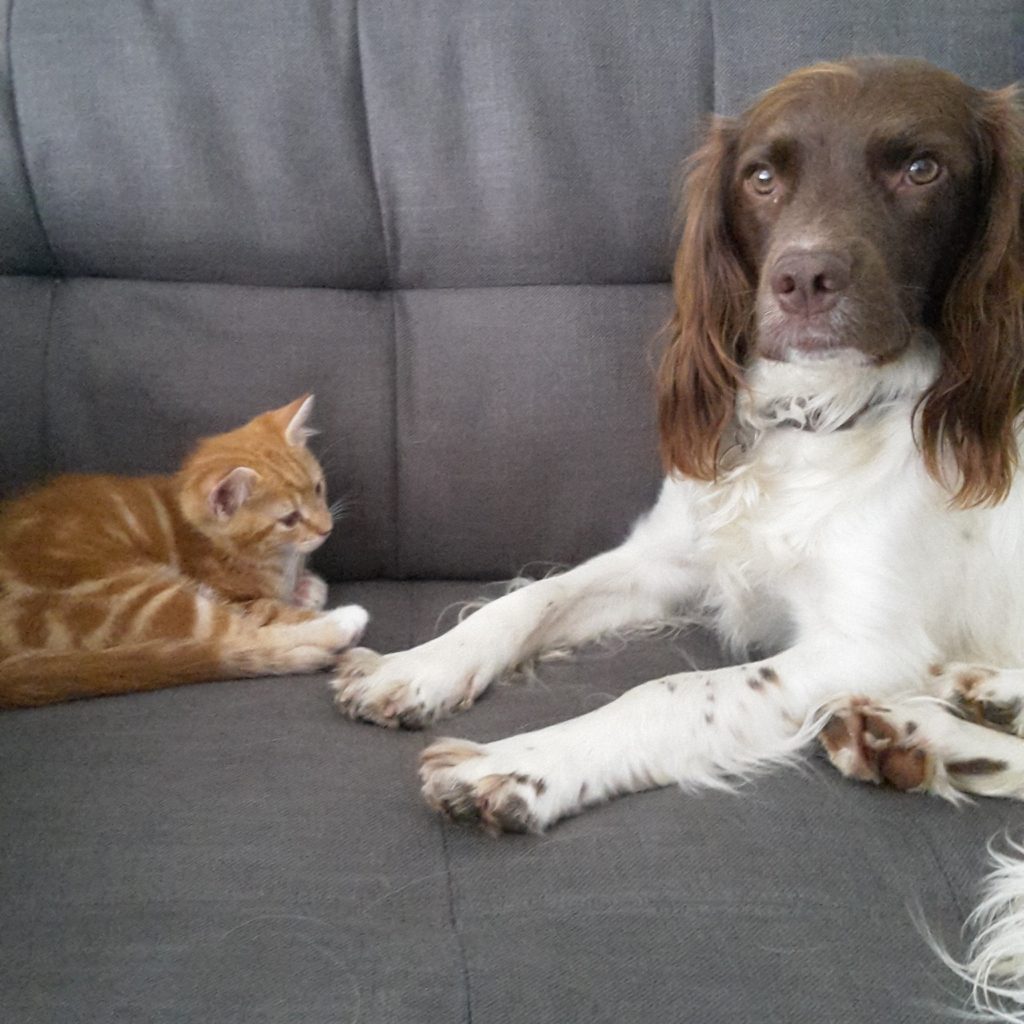 Around about two years ago, a little bundle of fluff in the shape of a Springer Spaniel zoomed into our lives and fairly quickly turned them upside down. I took the month of August in 2014 as a work from home month and imagined all the things I’d get done in that time around the house and really kickstart my blogging efforts, vowing to blog every day. Of course the rest is history and I’m not even sure one blog post happened because  life with a puppy was a little more challenging than I expected. 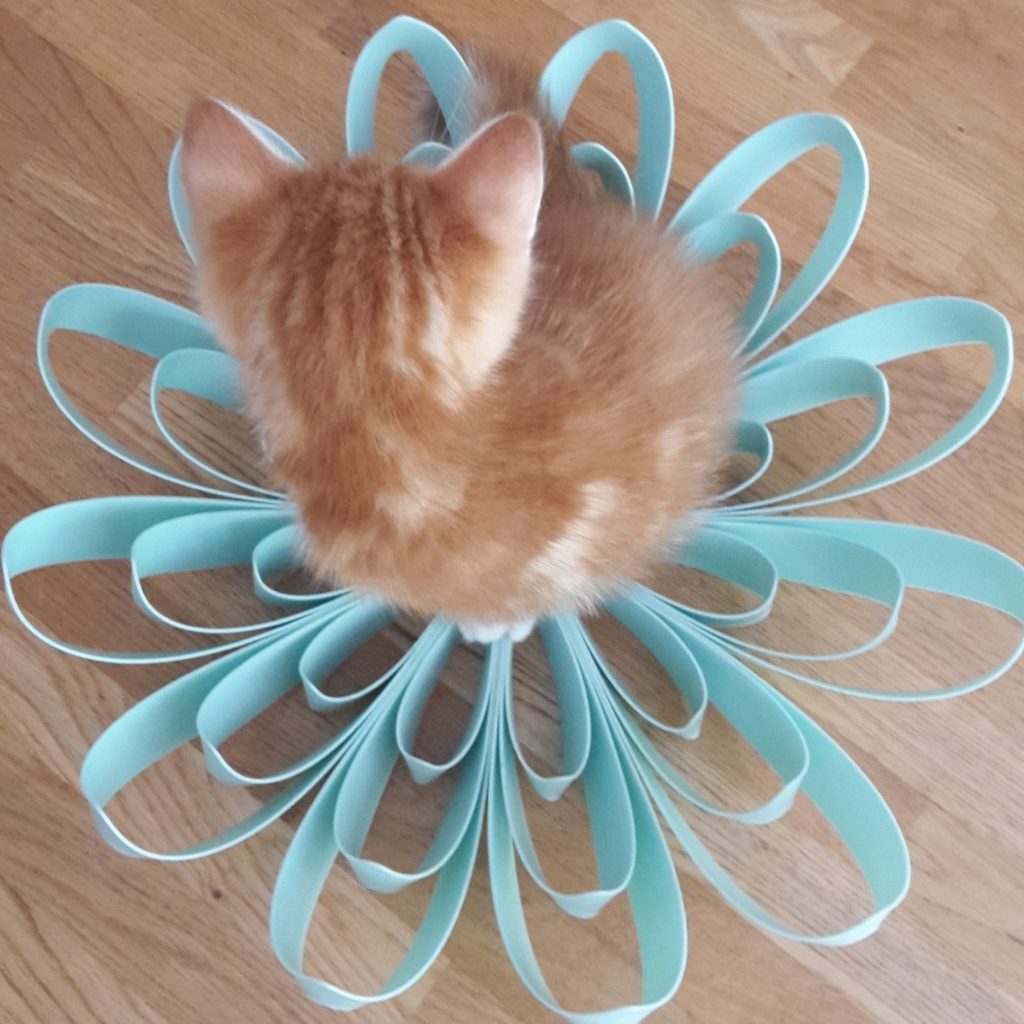 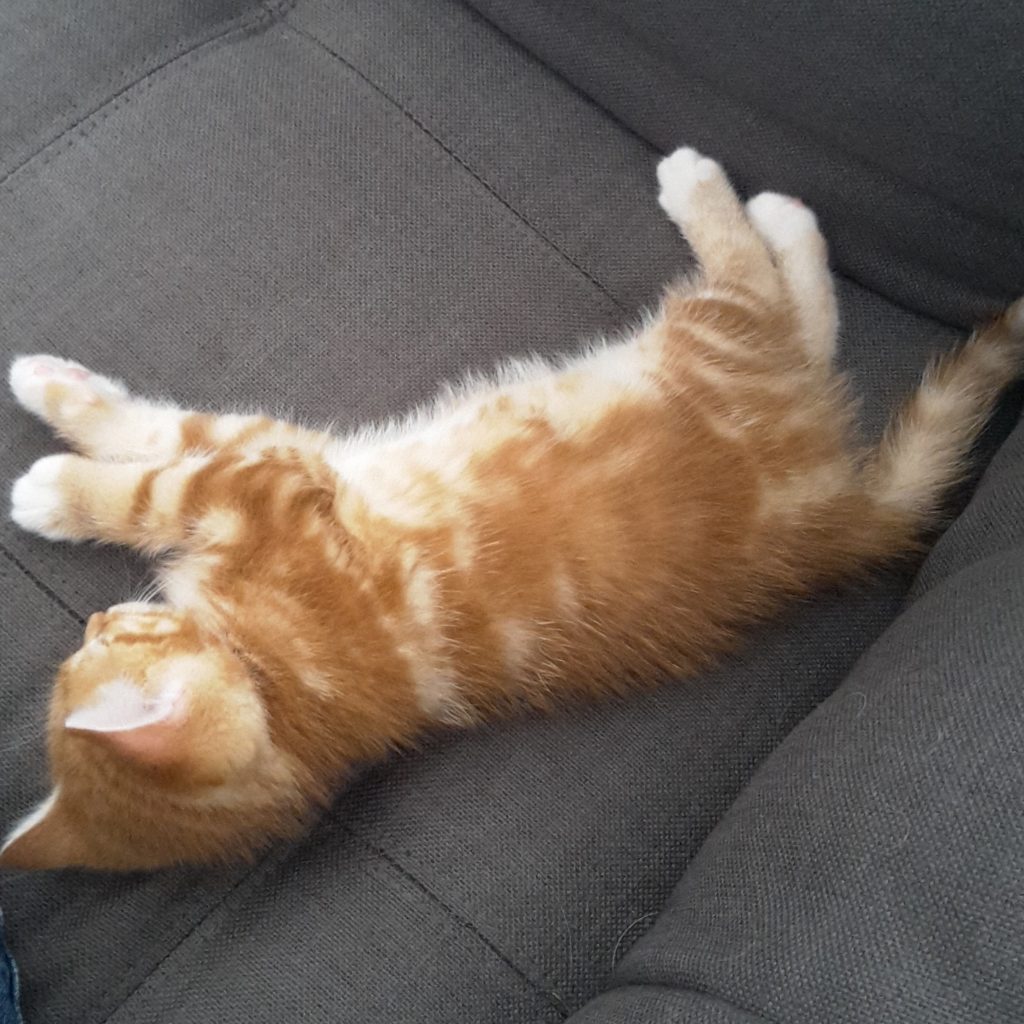 Fast forward two years, and my blog’s other namesake Boo has finally joined us! In my mind it always made sense to get the dog first and then introduce the kitten, mainly because dogs tend to be a lot more laid back then cats and because Pete has told me numerous times that he’s not a cat person. Ho hum. He had a Cavalier King Charles growing up whilst mine were a Springer and for some time a rescue Yorkie. I’ve spent my life around animals and am fairly besotted by most of them. However, I totally appreciate that if you don’t have any experience of pets growing up then you won’t feel the same as me and Pete only ever knew cats to be aggressive, volatile, antisocial individuals belonging to his friends. None of his family are cat people and have more or less turned up their noses at the idea of having one. 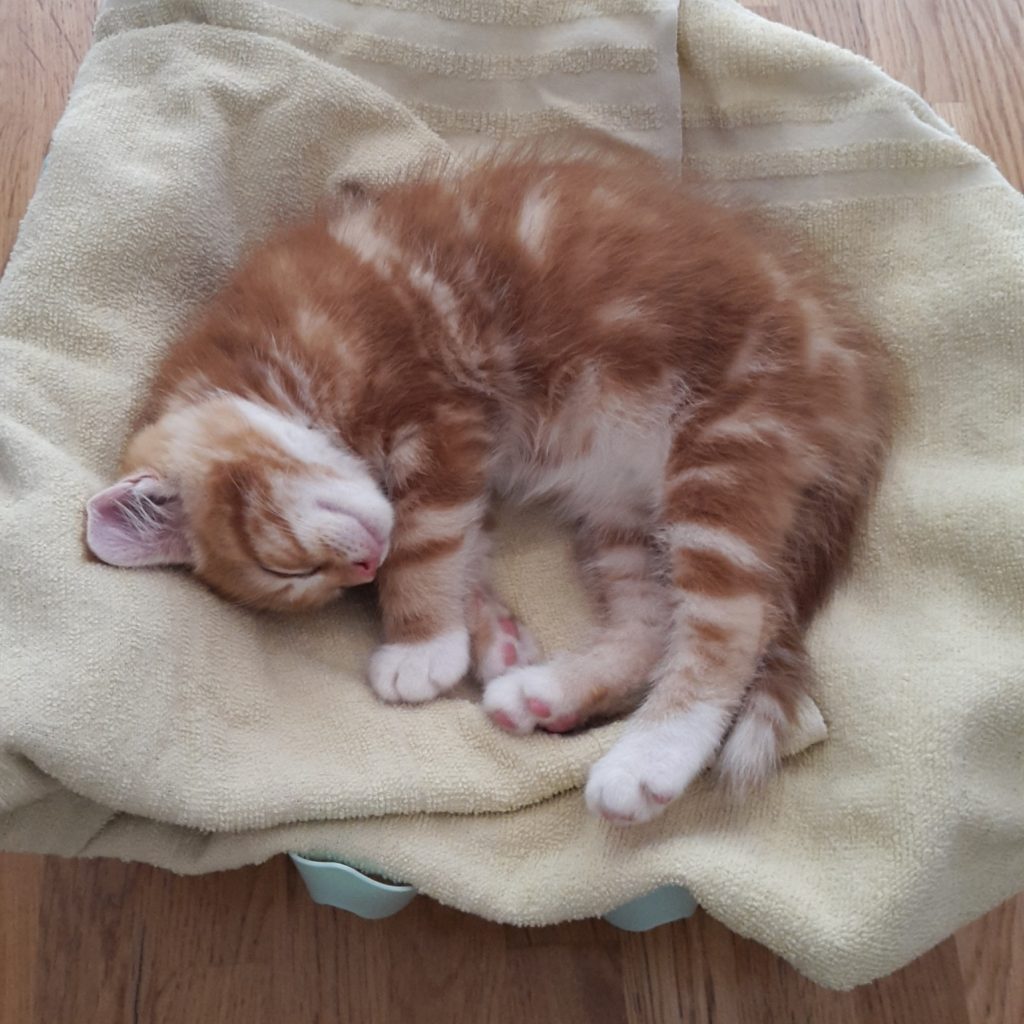 However this is me and it was never going to be just any old kitten for us. Well actually, he is just any old kitten, a regular short-haired domestic moggie. Nothing special, no breeding. Yet his feisty little personality defies his ordinary background and just over two weeks with us has been enough time to make it feel as though he’s been here forever. We LOVE him. He’s adorable, he’s cheeky, he’s super smart. 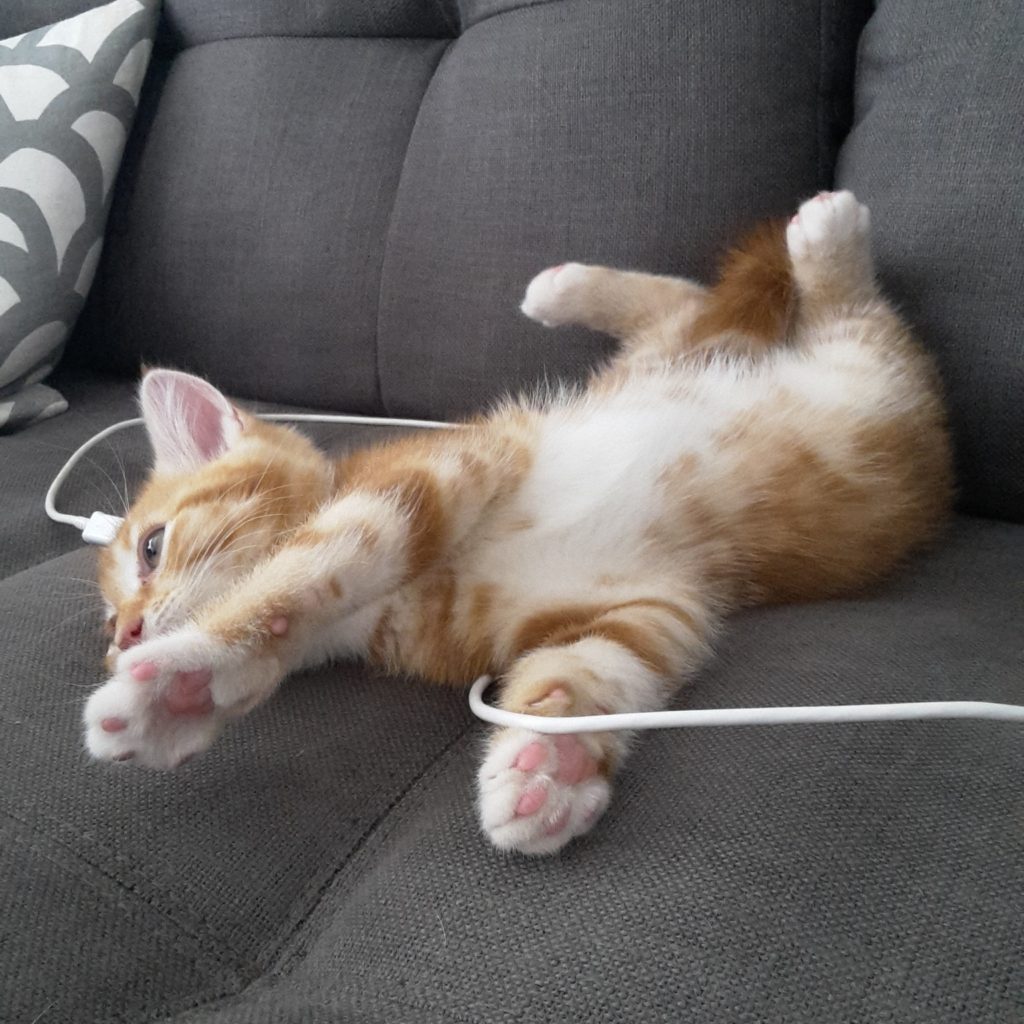 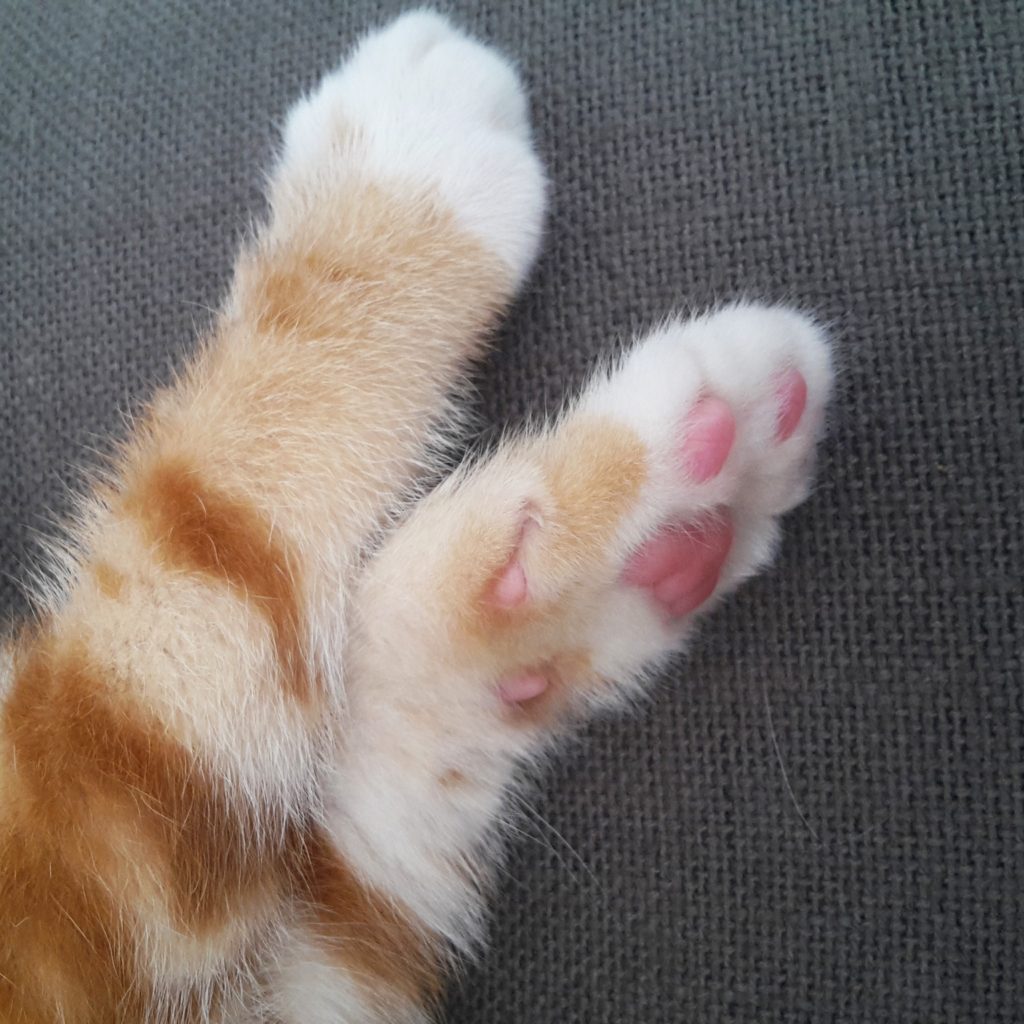 It’s been a very long time since I had a kitten in my life, at least 20 years and I’d forgotten just how quickly they learn and grow – far more so than puppies. It took Maddie about 4 weeks to learn how to climb the stairs and Springers are incredibly intelligent dogs (despite the stupid reputation – they’re not police sniffer dogs for nothing!) but Boo was up the stairs at less than 9 weeks old and now loves nothing more than running all the way up to the top of the house and hiding under our bed.

Needless to say, Pete is besotted. He’s made such an effort to get to know Boo and spend time with him, learning to read cat body language and giving him distance when he gets that slightly crazy possessed look which cat owners and lovers will be familiar with. I was worried that the introduction of a kitten into the home would create a bit of ‘them and us’ with Pete and Maddie disappearing off into a cosy little huddle of two but I couldn’t have been more wrong. 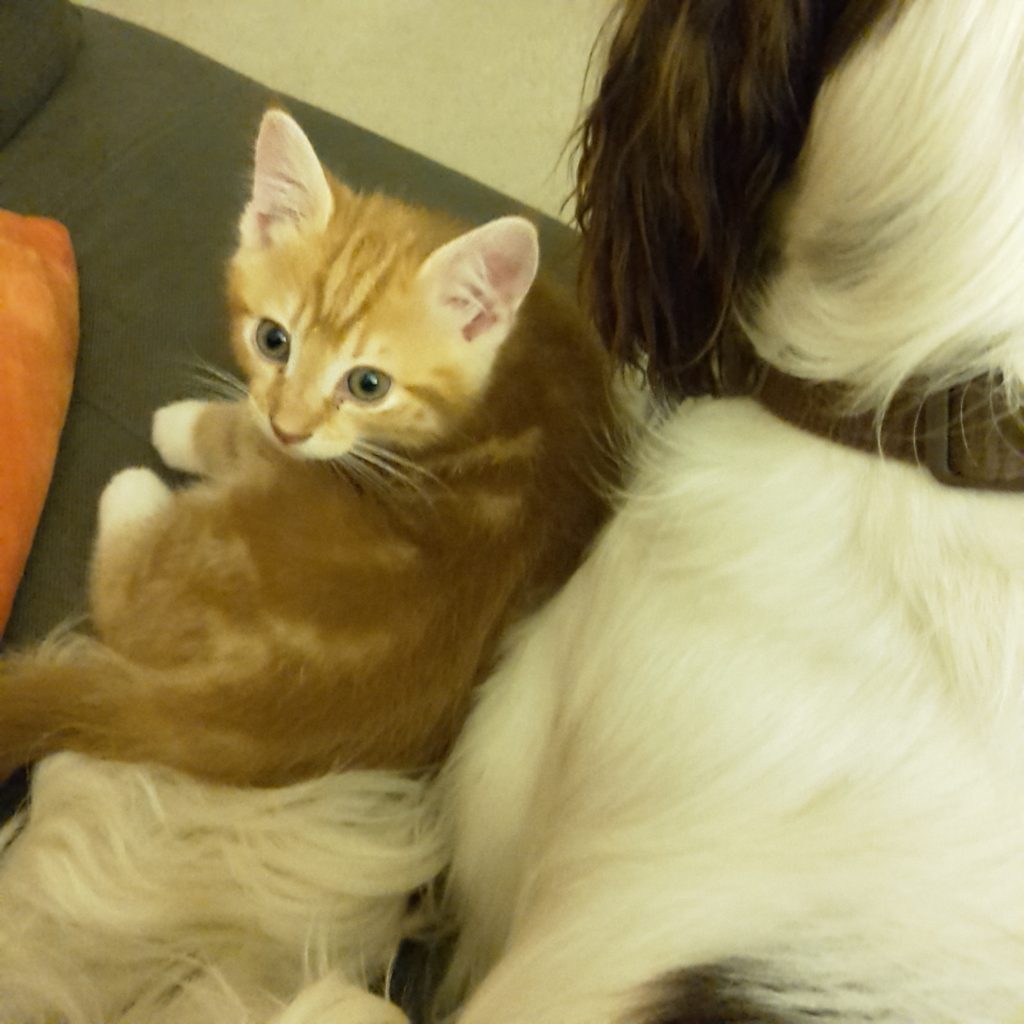 And what of our beloved first fur baby? I took the first week as working from home so I could spend time introducing them to each other. All the books will tell you that you need to give a least a week for a kitten before introducing your other animals but Maddie was going absolutely crazy knowing there was something else in her home but not knowing what it was. So I used all my animal wisdom (of which there is an awful lot) and after less than 12 hours decided to introduce the two of them. We had a week or so of holding her collar whenever Boo was around so he could find his feet but now they are as thick as thieves and Boo has worked out all the escape routes he needs if Maddie gets a bit too much – she is after all, only 2 herself. I knew though that she would take it all in her stride because Springers are such caring, loving dogs and now she just wants to be with him all the time. 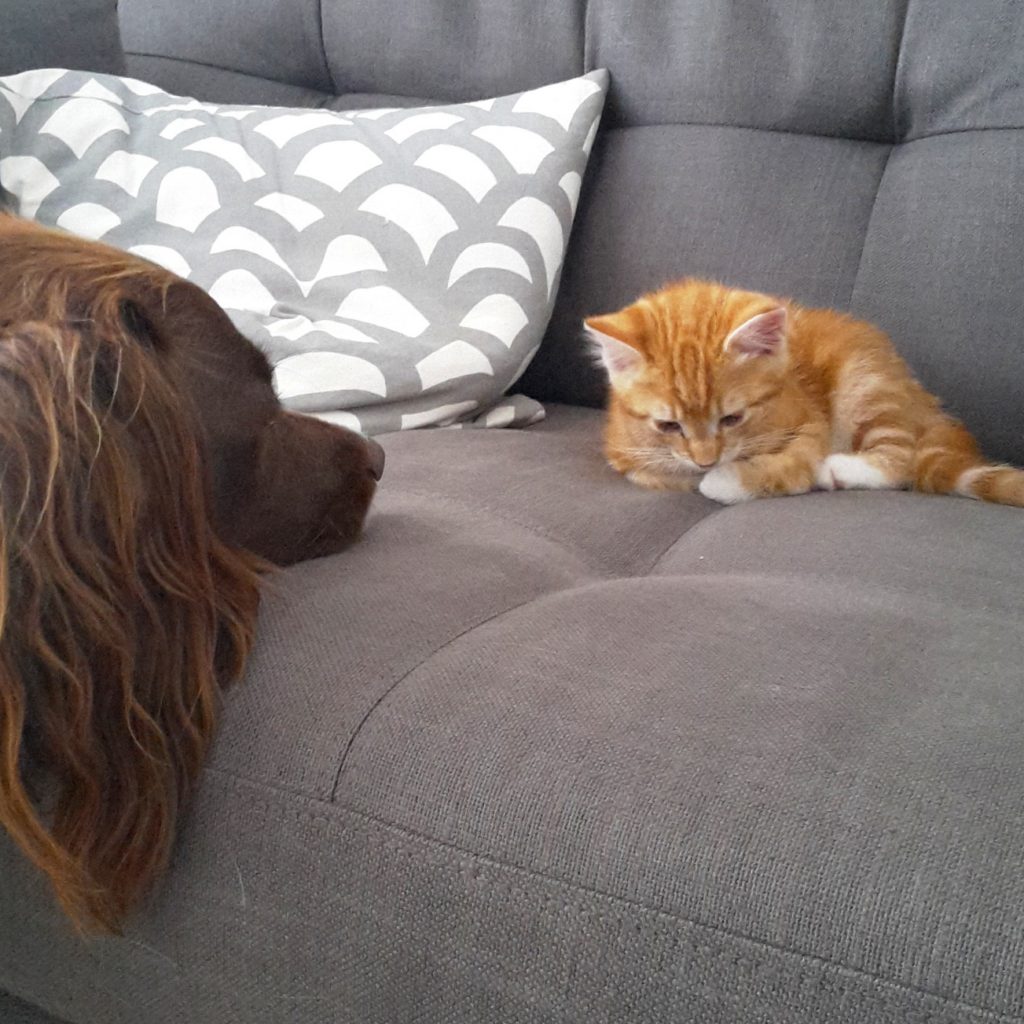 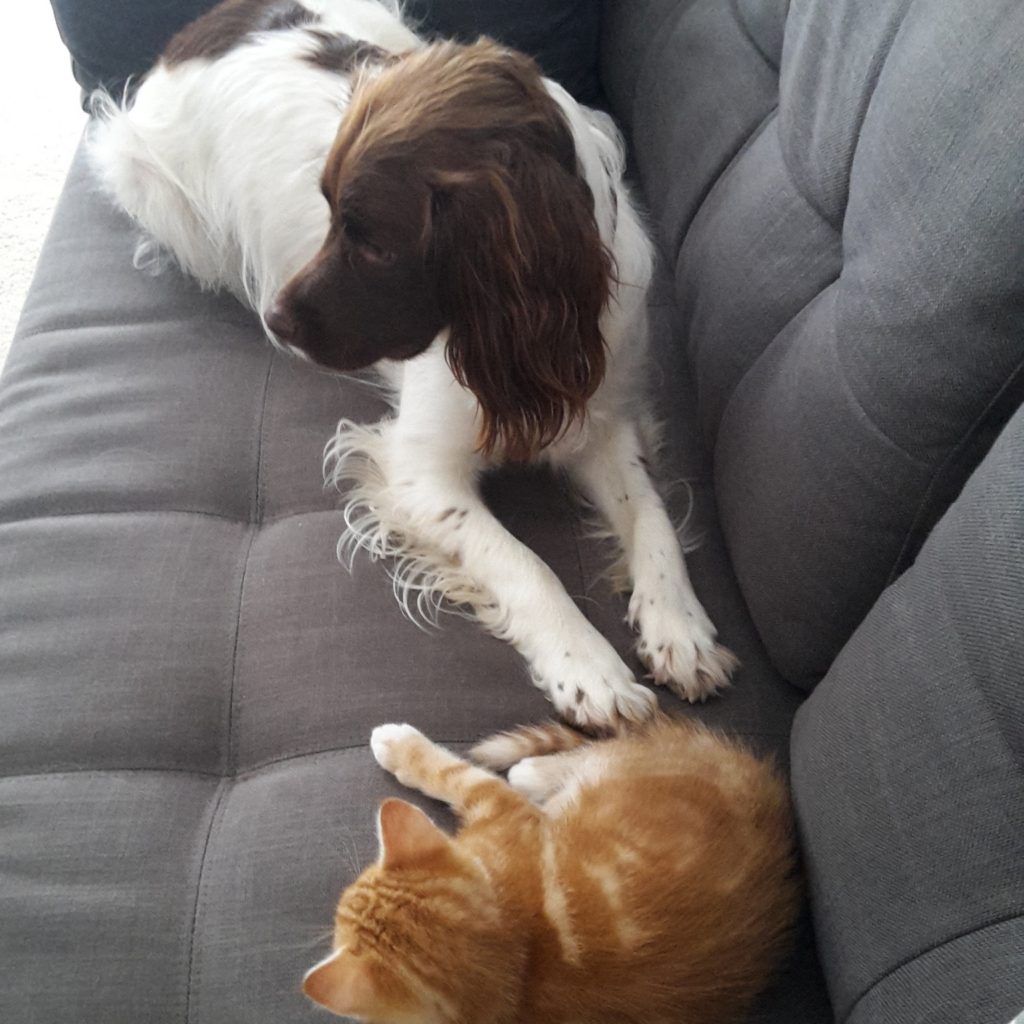 We still wouldn’t go out and leave them alone with each other but can now be at home or in the garden and know they’ll both be fine even though Boo isn’t even 3 months old. I’m not sure I believe in reincarnation but their relationship is so similar that part of me does wonder if it’s my childhood Springer and cat come back to life, such is their love for each other already. Our little fur baby family is complete and it’s been well worth the wait.