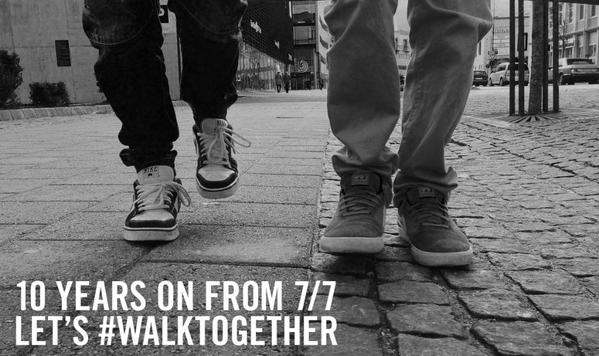 “Well this is unusual”, someone said. “It’s not even 9am and we’re all here”. I remember that day.

I work now for the same company I’ve worked for since 2003 but our office back then was on the corner of Old Marylebone Road and Edgware Road. We had an even smaller team than we do now, and on that day there were 4 of us due in the office. My journey was to get on the Hammersmith and City line at Hammersmith, and take a train round to Edgware Road. Our office was not even 5 minutes walk from the station.

We were all at our desks, teas and coffees made and the radio was on on my PC. We used to listen to Capital FM as they had some dating thing that was always on at 9.30 that used to make us laugh.

Sirens were a fact of life, we were so close to Paddington Green police station that not an hour went by without hearing one. So when we heard siren after siren that morning we thought nothing of it.

Then the radio started reporting that there had been an electrical surge somewhere near Liverpool Street. We thought the sirens we heard were racing off towards that part of London because no-one yet knew what had happened. What was unfolding. The unthinkable, unimaginable horror.

We carried on working; laughing, chatting, not paying much attention to anything. And then the news came, relentlessly, never-ending. We stared at each other, refusing to believe what was happening. I use the word shellshock because that’s the closest I can get to describing that day.

Frantically, we made phone calls to people we knew worked in the affected areas. I knew my boyfriend was safe because he worked out of London but I couldn’t get hold of my friend Pete who worked at Liverpool Street. Eventually I heard from him that he was safe. I didn’t know it then but just two years later we’d be married.

The desk phone rang, sometimes I answered it, sometimes I didn’t. We couldn’t. We’d lost the ability to speak, to make sense, to understand. Our bosses from the US called to make sure we were ok; my Mum called, on holiday with my step-dad in Hong Kong. My Dad called, after not hearing from him for 2 years. “I’m alive” was all I could manage.

We were quarantined inside the building for fear it was too dangerous to go outside. We hung out of windows, watching armed police racing up and down Edgware Road. We listened to the news, we wondered when it would all be over. There were no tears, I think we were too numb to shed them.

Eventually, we went home. No underground, no buses, no trains. I don’t even know how the others got home but I was only a 40 minute walk away. I sat in my little studio flat in Olympia, waiting for my boyfriend who was walking all the way from outer London. People who worked for big corporations were being put up in hotels. No-one wanted to be alone.

I remember little of that evening but the next day is as clear in my memory as though it was yesterday. I set off down High St Kensington and what I saw amazed me. People were going to work, on foot, by bicycle, by pogo stick if they had to, but en-masse. London and all of its residents were sending the loudest, clearest message that we would not be beaten, or scared, into hiding. I saw business men in suits on the back of motorbikes. I saw people on bikes who looked like they hadn’t ridden one for 20 years, people on roller blades. And people walking. All of us, walking together. To carry on, to be defiant. The tears came for me then and I’m sure I wasn’t alone.

Today it’s 10 years since that terrible day. Our office is now at London Bridge and I’m ever so slightly more than a 40 minute walk away. Googlemaps tells me it will take 2 hours 46 minutes to walk, but I’m going to aim for 2 hours. I’m going to walk for all those who lost their lives, and can no longer do so. To honour the bravery of all the emergency services, the injured, the families of those affected. I knew then I’d always be a Londoner and so I’m walking because I love this city. Walk with me. Walk Together. 7/7/2005. I remember that day.