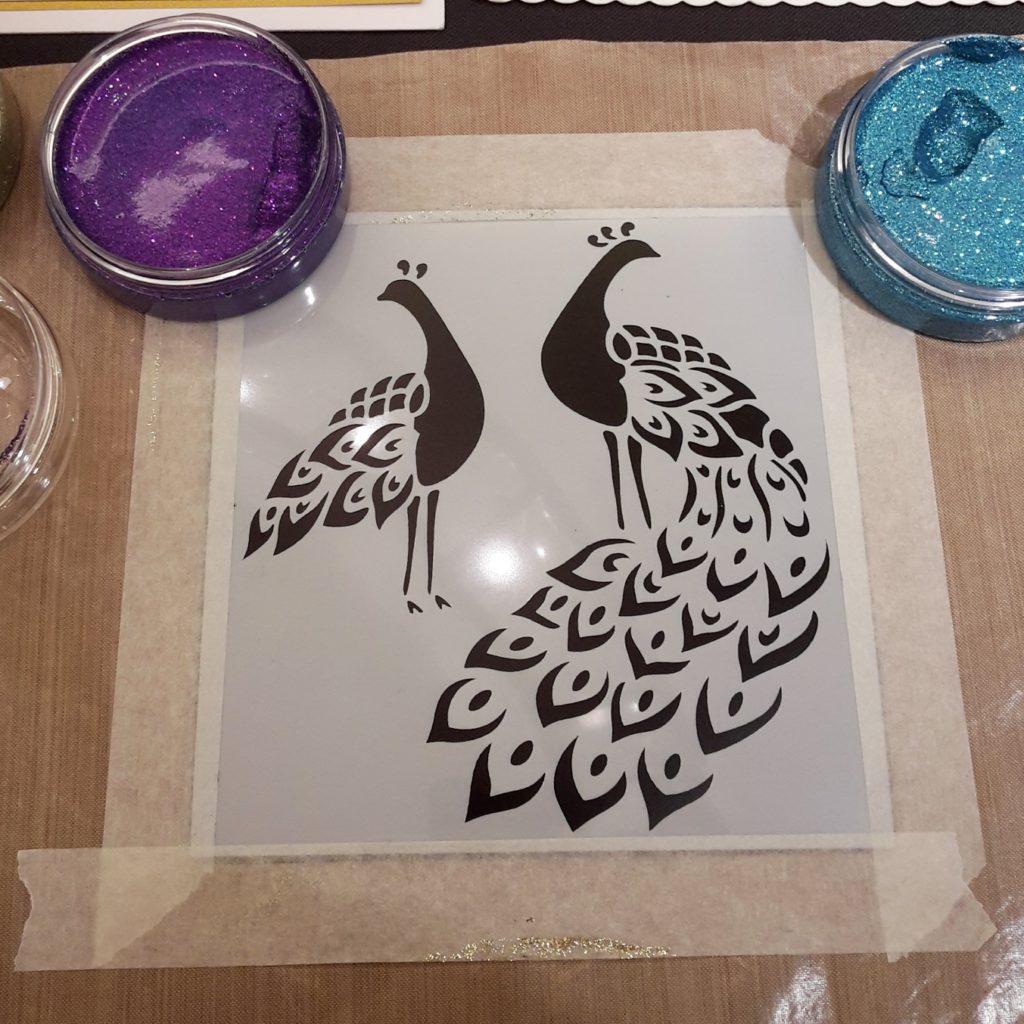 One of the many things blogging has introduced me to is a huge amount of awe and admiration for all the wonderfully talented and creative people out there. I’m so amazed and inspired by hacks, decorations, bloggers who seem able to turn a peach and an elastic band into a Renaissance villa fit for a kingdom. Seriously – people are THAT talented!

Crafting and being creative is definitely something that has passed me by, big time. If someone was to ask me what I’m good at, it would be smiling, being friendly and putting people at ease. Anything vaguely involving creativity and style, using my hands (or my brain!) is just not a strong point. So it was with a certain amount of trepidation that I ventured to the Ham Yard Hotel recently for a morning of crafting fun with Hochanda, the home of crafts, hobbies and arts, to see if my crafting skills were really totally non-existent or perhaps just buried under a lack of confidence.

The Ham Yard Hotel is a beautiful venue tucked just off Shaftesbury Avenue – the last time I was in that part of town it hadn’t even been developed so it was exciting to see how the area has changed. Making my way down to the Windmill Room I couldn’t help but stop to admire the unique interiors, I have a bit of thing about hotels and even though London is our home city Pete and I do take mini-breaks here from time to time. Because life is always that much more fun when someone else is making the bed. 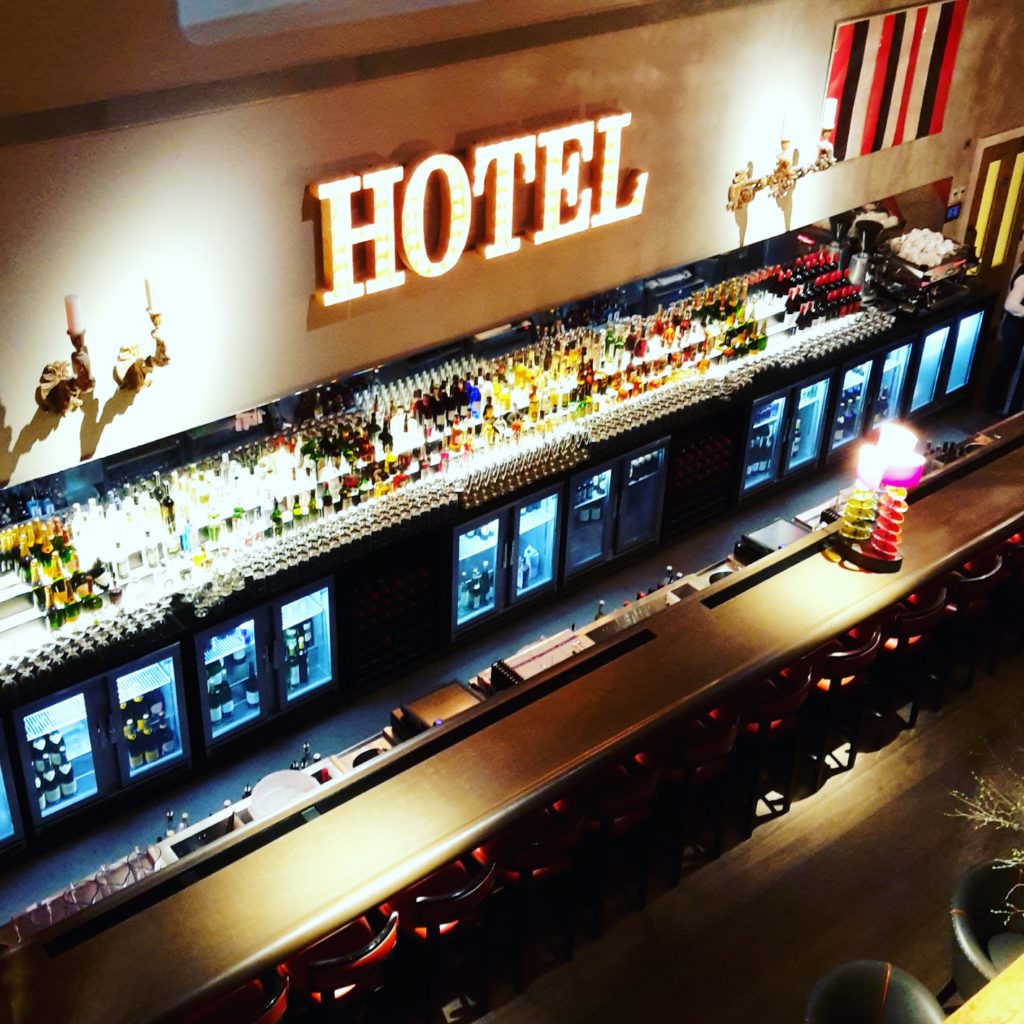 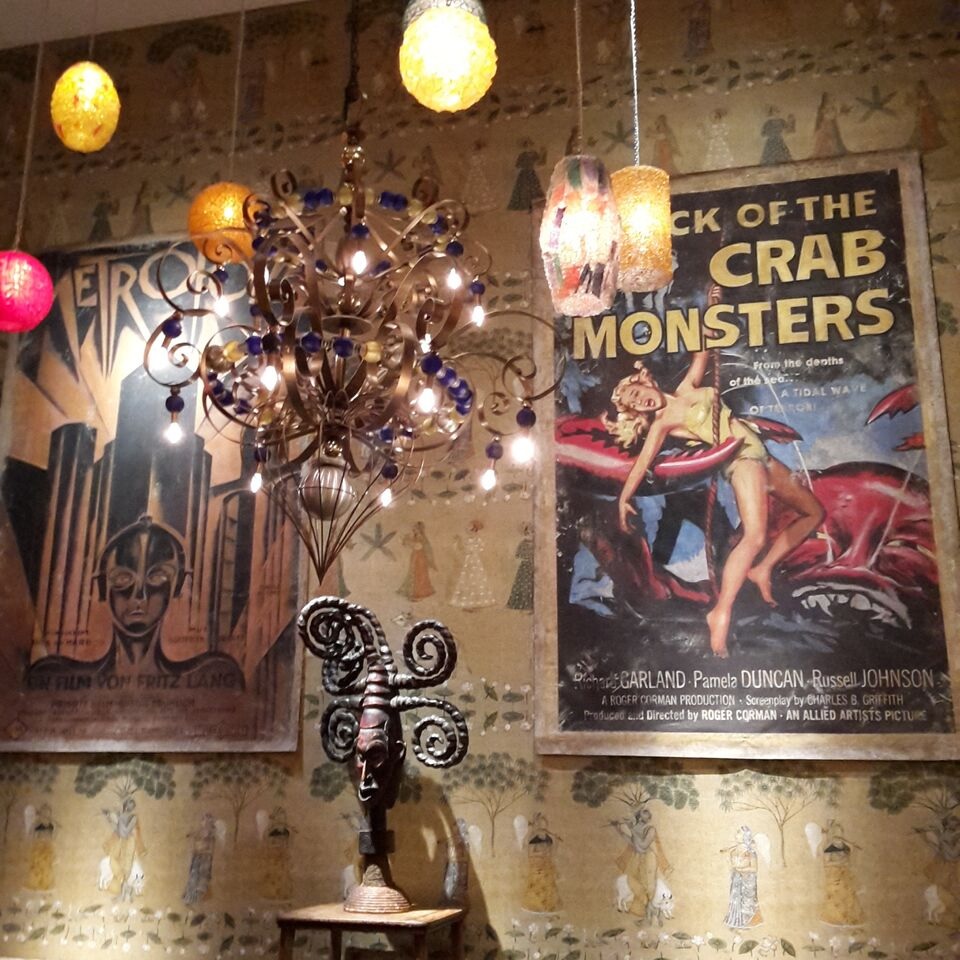 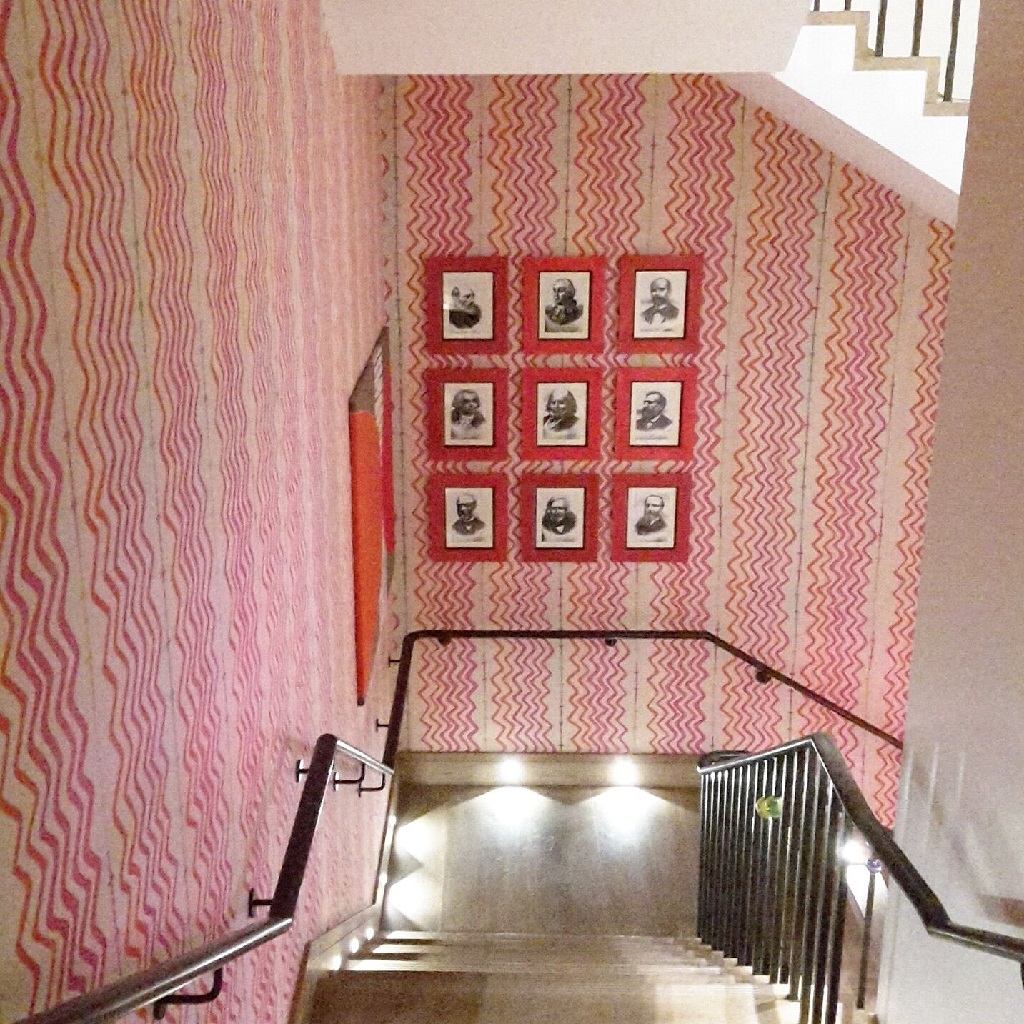 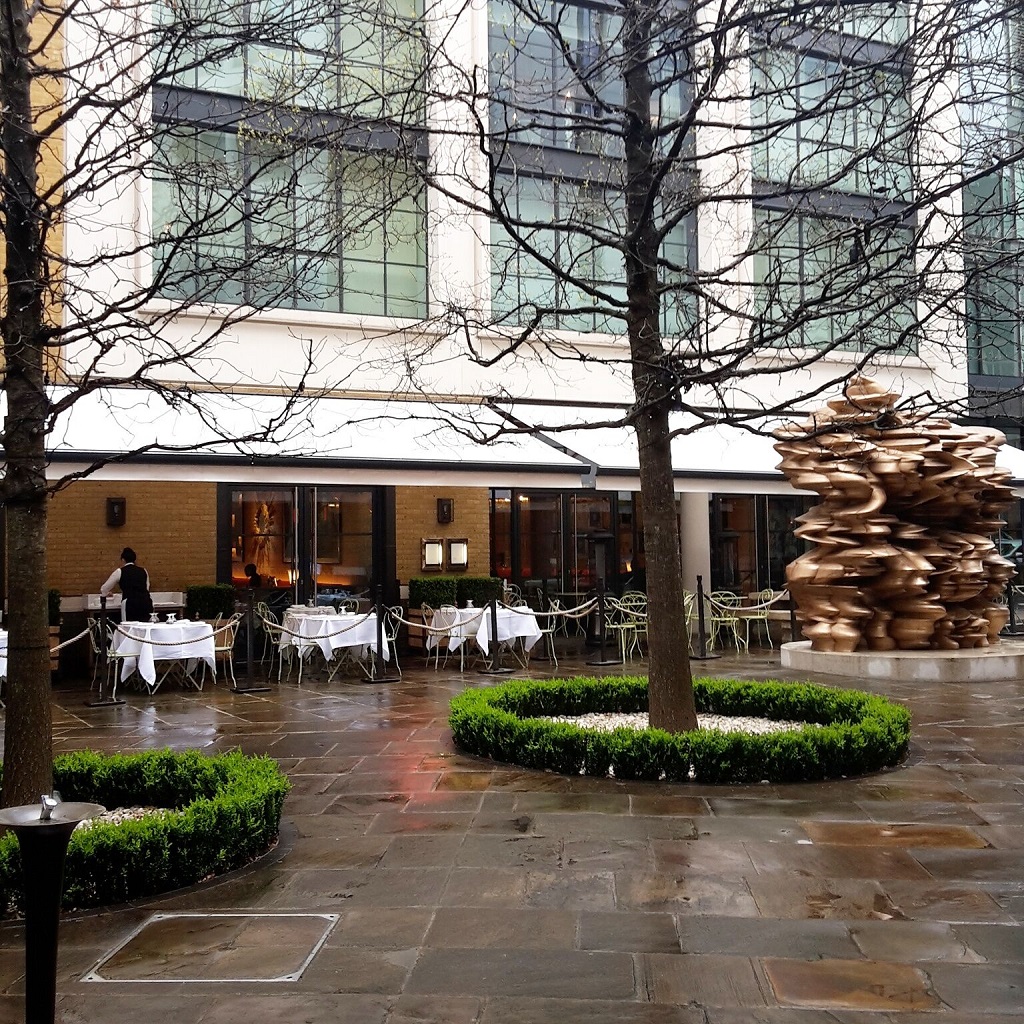 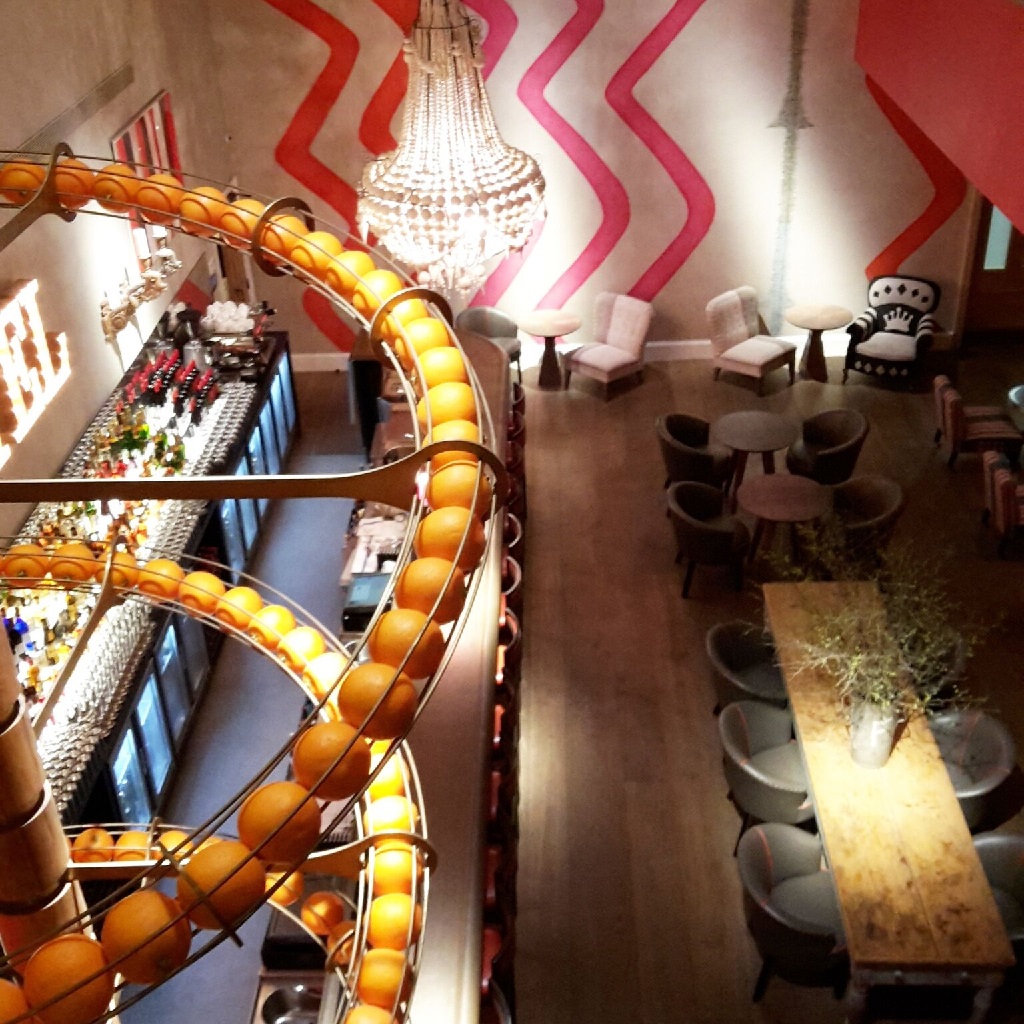 Hochanda is a brand new online and TV shopping channel launched in 2015 to satisfy a growing passion across the UK for crafts, hobbies and arts. The retailer offers a wide range of products for all passions including knitting, painting and paper craft and some of these crafts were being demoed and available at the crafting extravaganza for us to have a go at. 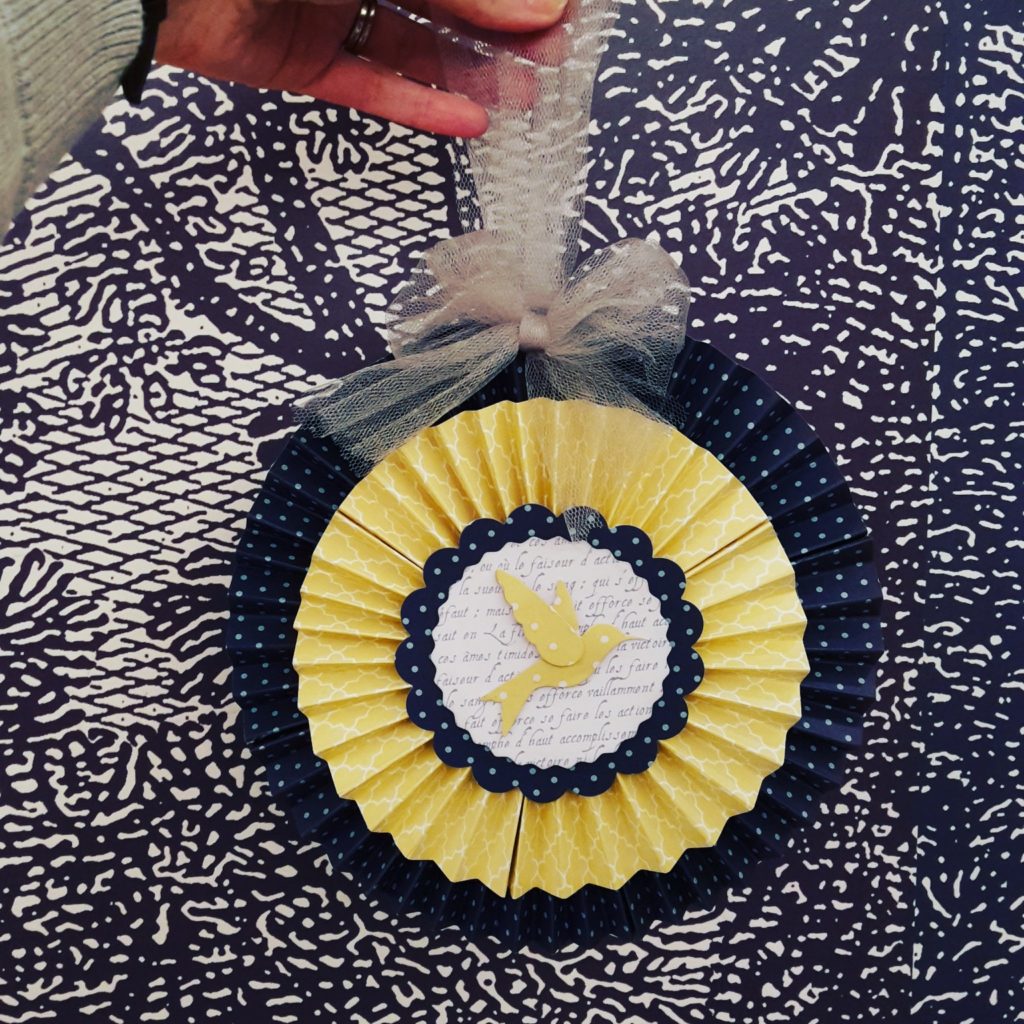 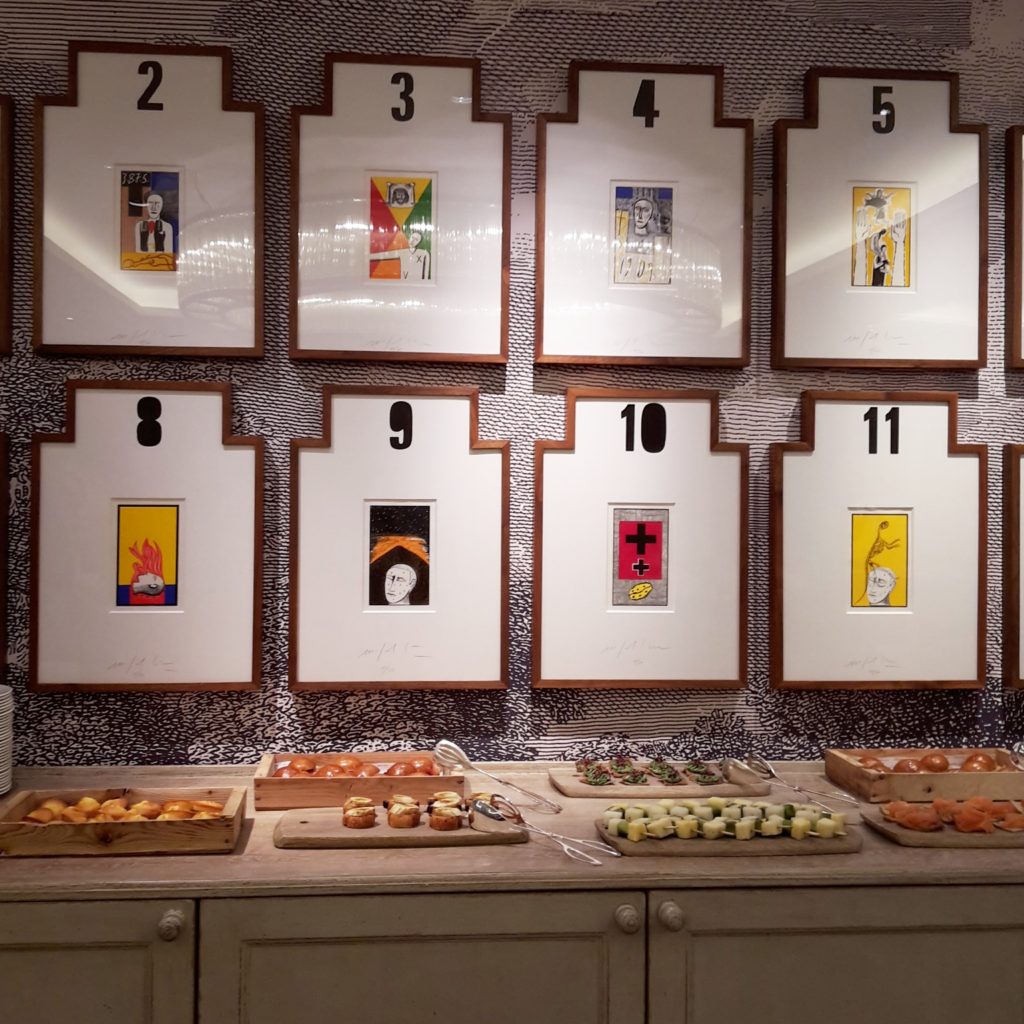 On the morning, four of Hochanda’s most popular suppliers and presenters were available to show us the ropes and answer any questions we had about developing a new skill. These included Barbara Gray from ClarityStamp, demonstrating the ‘Groovi’ range to make the art of Parchment Craft available to everyone; Katie Skilton from Sizzix, a leader in die-cutting and embossing tools; Lisa Baker from Imagination Crafts, who set trends in crafting and produce some of the most spectacular, non-shedding glitter mediums, paints and pastes in the craft market and Matthew Palmer from SAA Watercolour, who have over 43,000 members and encourage painters of all levels from the hesitant beginner to the seasoned professional with support to fulfil their potential. 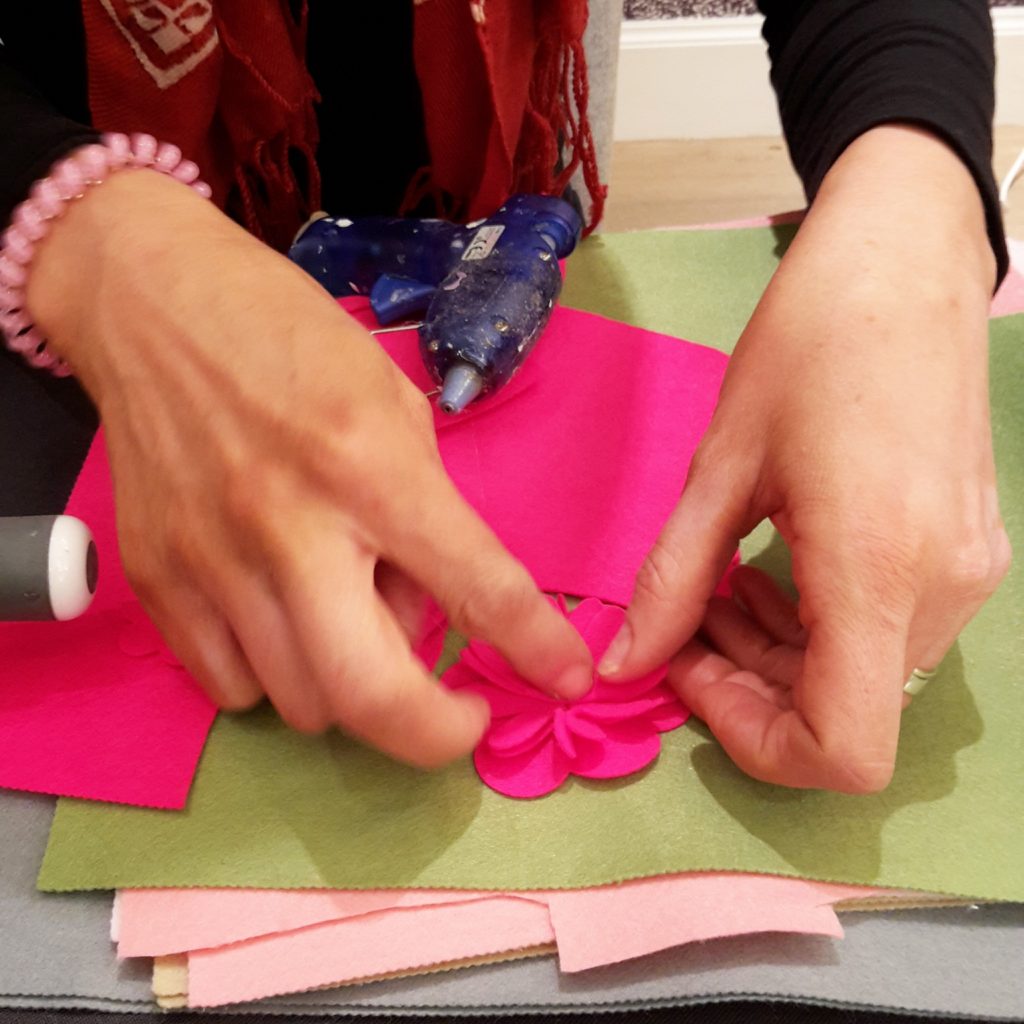 Unfortunately I had limited time so couldn’t try all the different stations but made my way to Imagination Crafts, drawn like a magpie to all the pretty glitter. One of Imagination Crafts most popular products is Sparkle Medium, a non-shedding, flexible Glitter Gel that can be spread easily through a stencil using a palette knife and applied to most surfaces. I was shown how to carefully tape my stencil using masking tape onto a backing card and then dipping my palette knife into the Sparkle Medium carefully slide it over the template before scraping the excess and selecting a different colour to continue spreading until all the stencil was covered. Once completed the stencil is then carefully lifted to reveal the completed design which then is left to try. It’s amazing – no glittery mess anywhere! Plus scraping the excess into a new container means that brand new colours can be created so as not to waste any of the Sparkle Medium. I found this incredibly therapeutic and was hooked. 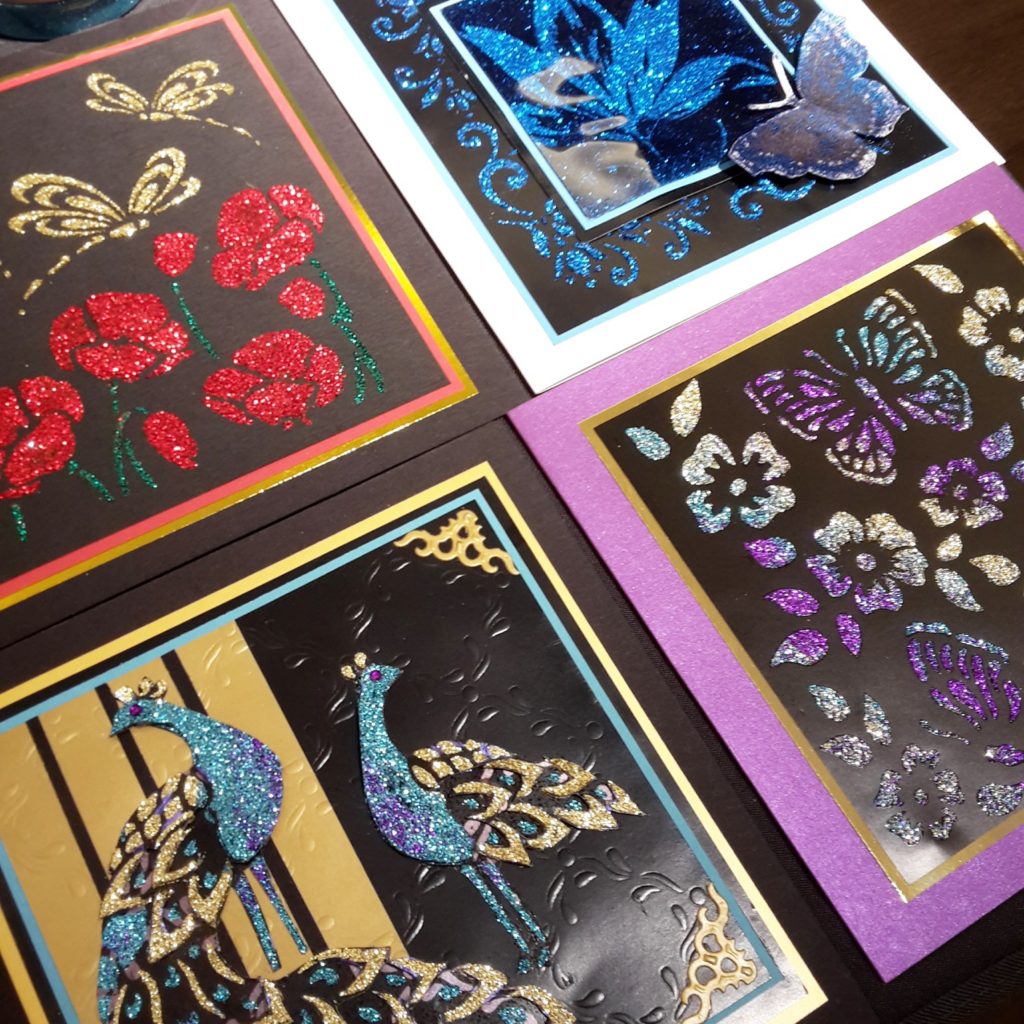 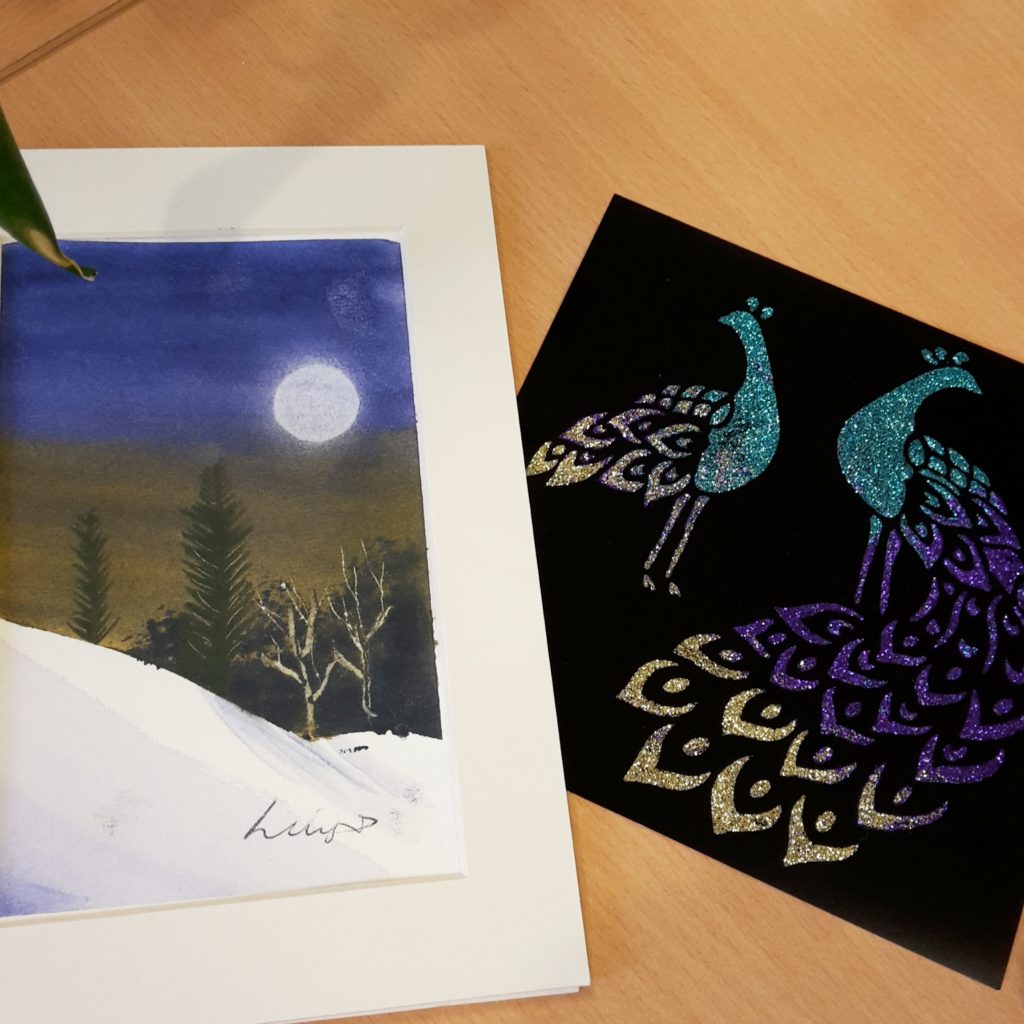 My Sparkle Magic and Watercolour attempts

Next I moved on to the watercolour station, having been told that I could master watercolour under the expert tutelage of Matthew. And out came the cynic in me because I do not draw, paint, have any interest in it whatsoever. I literally used to dread having to play Pictionary because whatever team I was on would lose because my drawing was so appalling. Even stick men. 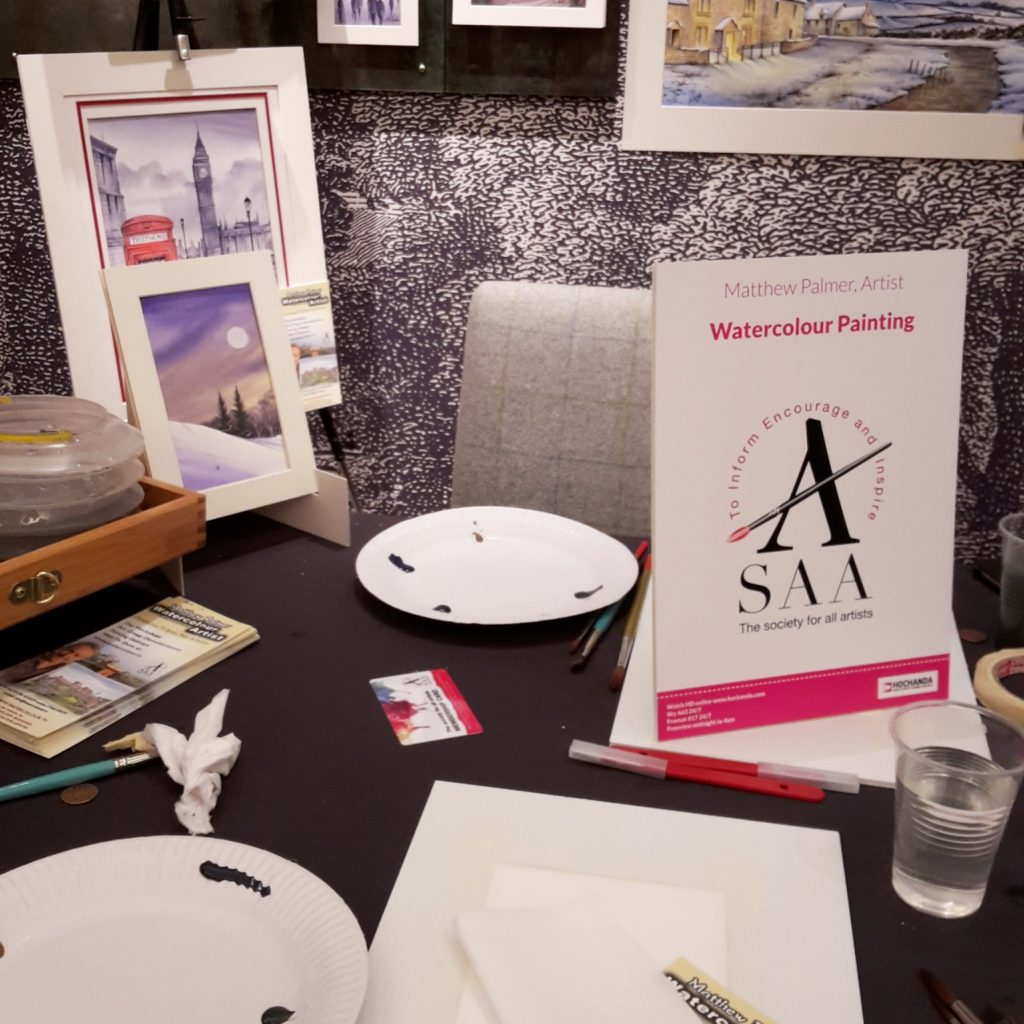 Matthew had a “template” painting that we were to use and copy of a wintry nighttime landscape. I discovered that it was key to use certain types of brushes for certain elements of painting and if I’d attempted it myself I would never have known. Little by little the painting came together including little tips like using a one penny piece covered in tissue for the moon and roughly positioned masking tape to separate the snow from the sky. My colours are a little heavy-handed and on reflection I should have used more water to water them down a touch but what do you think? For someone who hasn’t participated in any kind of art since my third year of secondary school in 1993 when I could thankfully give it all up ahead of GCSEs, I was surprised that it didn’t look too bad in the end. 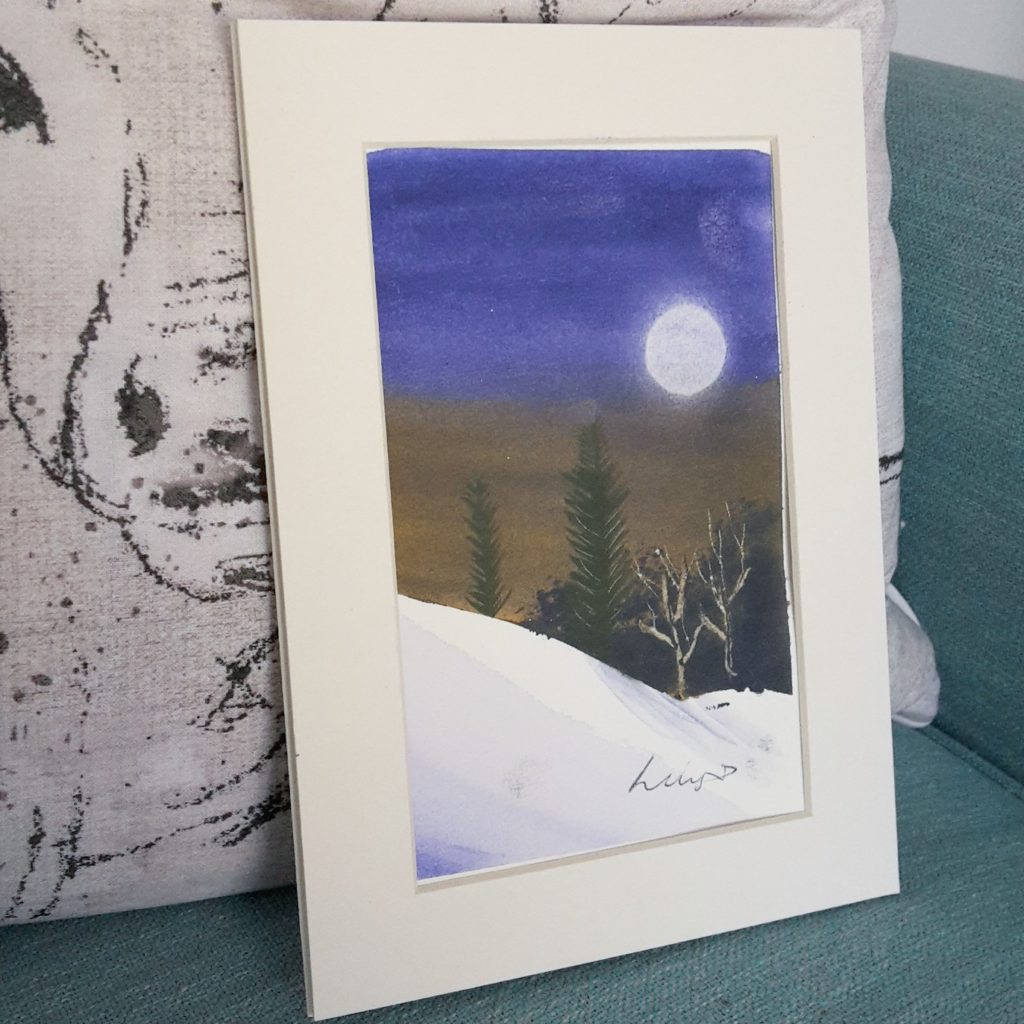 Sadly I had to make my way to work after that but I definitely took some renewed confidence away from my demos and might just dip my toe in the crafting water here and there. Hochanda TV is broadcast live between 9am and 9pm each day so why not check them out?

Thank you so much to Hochanda for inviting me along to their crafting extravaganza. Hochanda, the home of crafts, hobbies and arts, is broadcast live on Freesat 817 (24/7), Sky 663 (24/7), Freeview 39 (6am – 9pm) and online in HD. All words, images and opinions are my own unless otherwise stated.