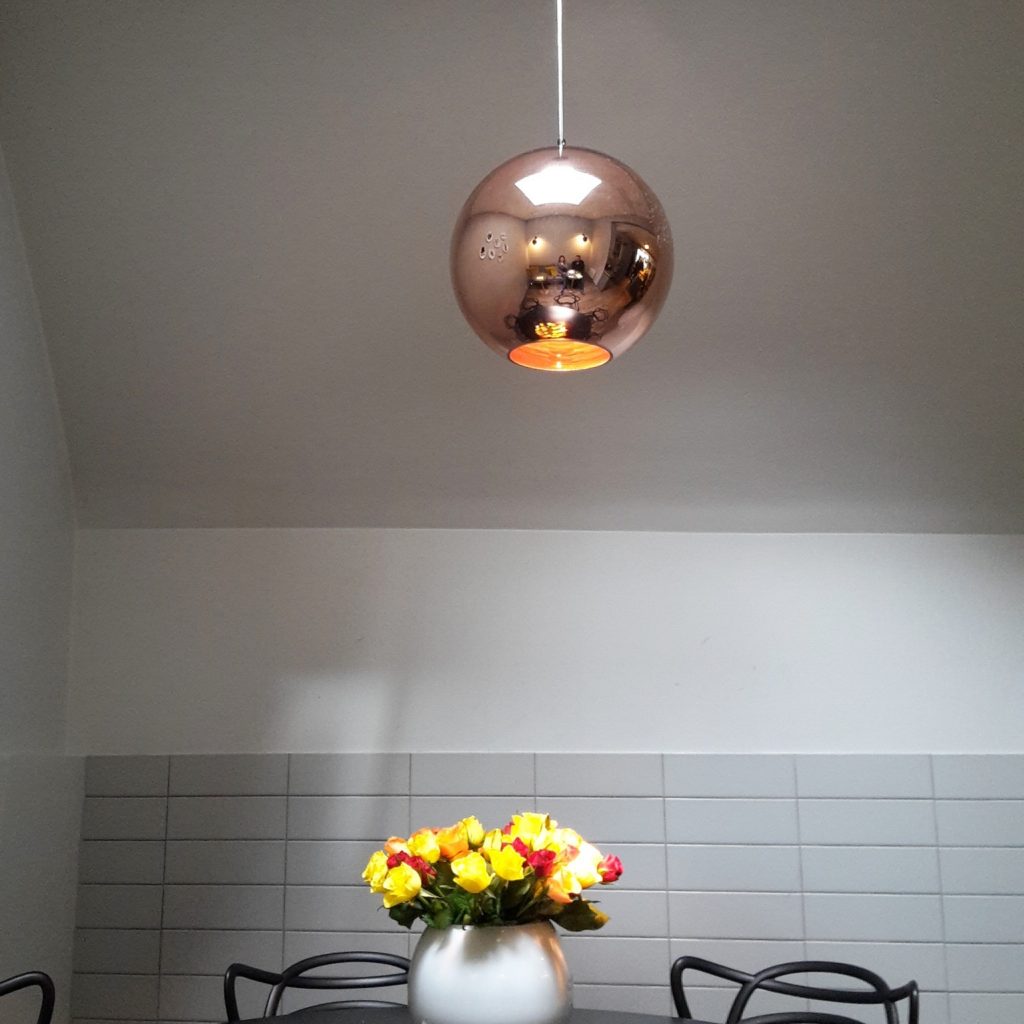 There’s nothing I love more than using weekend time to get out and about and explore with Pete – we’ve spent so long running markets for DaisychainBaby or using that precious time for such mundane tasks as cleaning and shopping that weekends were no longer fun and enjoyable and life was passing us by. This year we decided to make more effort to use some of our weekend time to visit new places and try new things and so last Saturday we set off for Fitzrovia to have breakfast at Beyond Bread, an entirely gluten-free cafe located just a short walk from Goodge Street station in Central London. 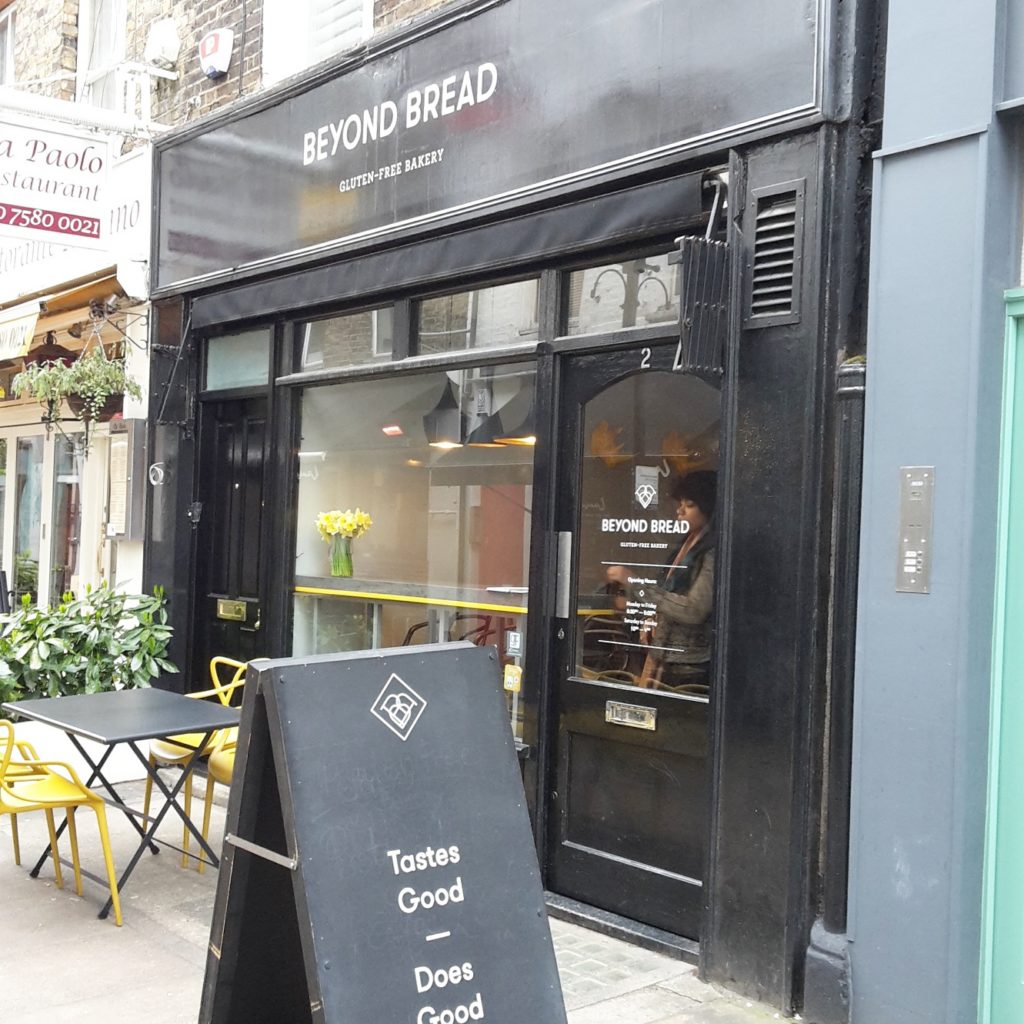 It’s now been 8 months since I was diagnosed with gluten intolerance after becoming increasingly ill as 2015 went on and prodding and poking, colonoscopies and blood tests finally revealed that whilst not coeliac, I’m very allergic to wheat, barley, rye and a whole host of other things that since eliminating them from my diet I’ve felt like an entirely new person. Of course people think that dietary-related illnesses are fads, all in our minds or stress-related. I can assure you though that spending hours vomiting – or even bleeding – is not all in my head and so with trepidation and excitement I embraced my new, permanent, way of life.

Food is a great love of mine and being British, lunch was default – sandwiches. In fact, daily food was entirely bread-based – toast at breakfast, sandwiches at lunchtime, some kind of bread with dinner. It was a huge struggle to adjust in the beginning and I experimented with making my own non-gluten bread but it didn’t taste the same. And so gradually I decided to forget about it and focus on changing how I ate rather than what, swapping sandwiches for soups or salad, toast for gluten-free porridge and eggs. 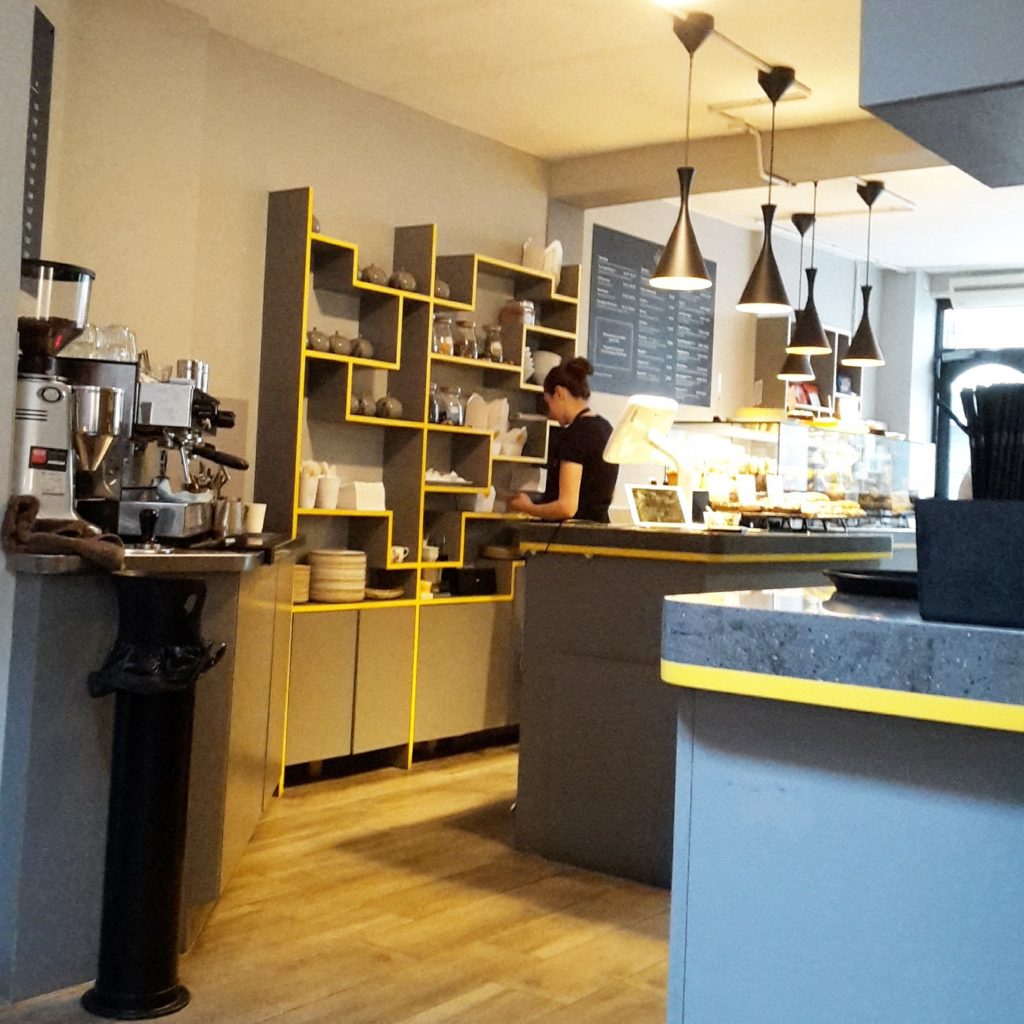 There are some incredibly supportive social media groups out there and it was through one of them that I heard about Beyond Bread, a relatively new cafe and bakery tucked into a little street a short walk from Goodge Street station and even better for me, in the perfect part of London to hit all the home shops afterwards – Heals, Habitat, West Elm, Dwell, Lombok as well as Paperchase’s three-floor flagship store and a fairly new Oliver Bonas are ALL on the same street. Bliss!

Despite being in a mildly hungover state as we made our way into town, my excitement at trying bread once again knew no bounds. The bakery is open daily and sells a wonderful range of breads, take-away sandwiches and cakes as well as providing catering, bespoke orders and of course the option to eat any of their sandwiches and cakes in their stylishly snug cafe. It’s small but perfectly formed with a variety of seating areas including a window-facing bar table, banquettes along the wall and a larger round table at the back. 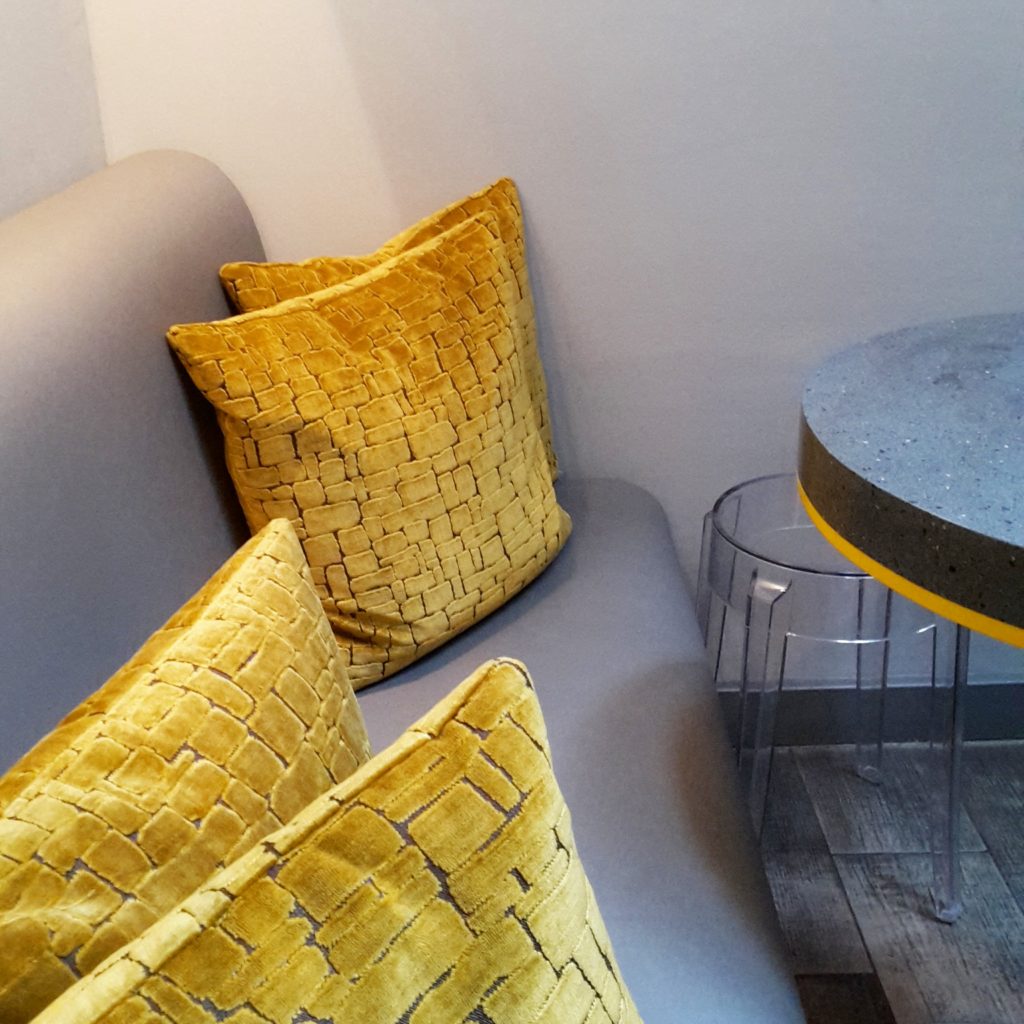 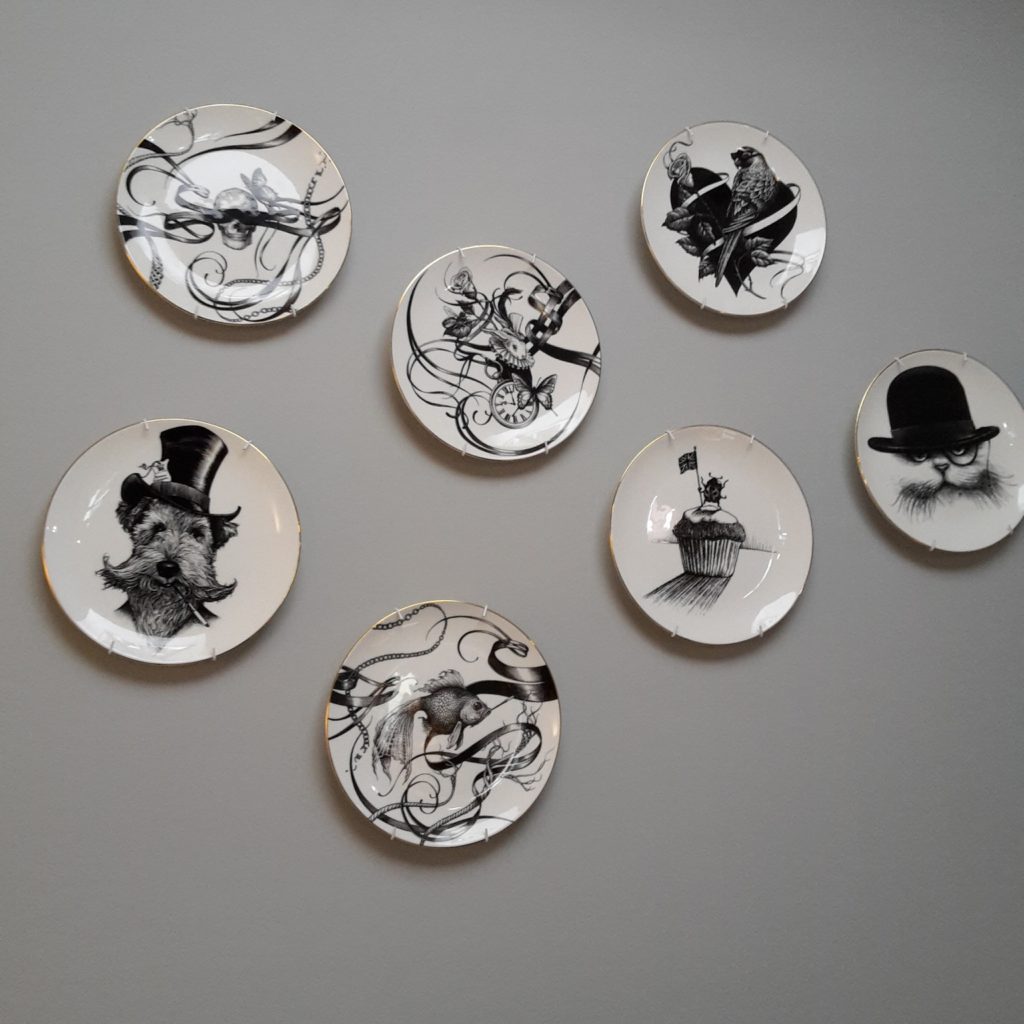 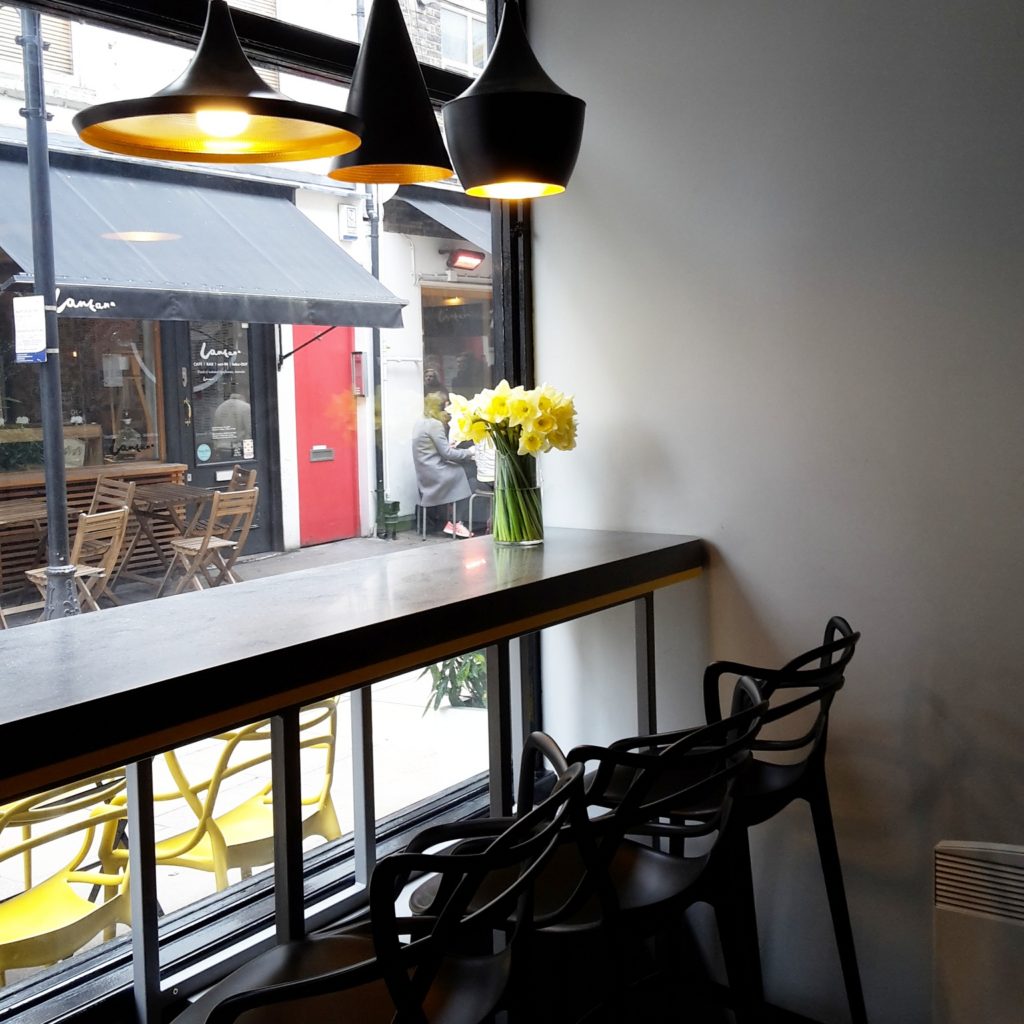 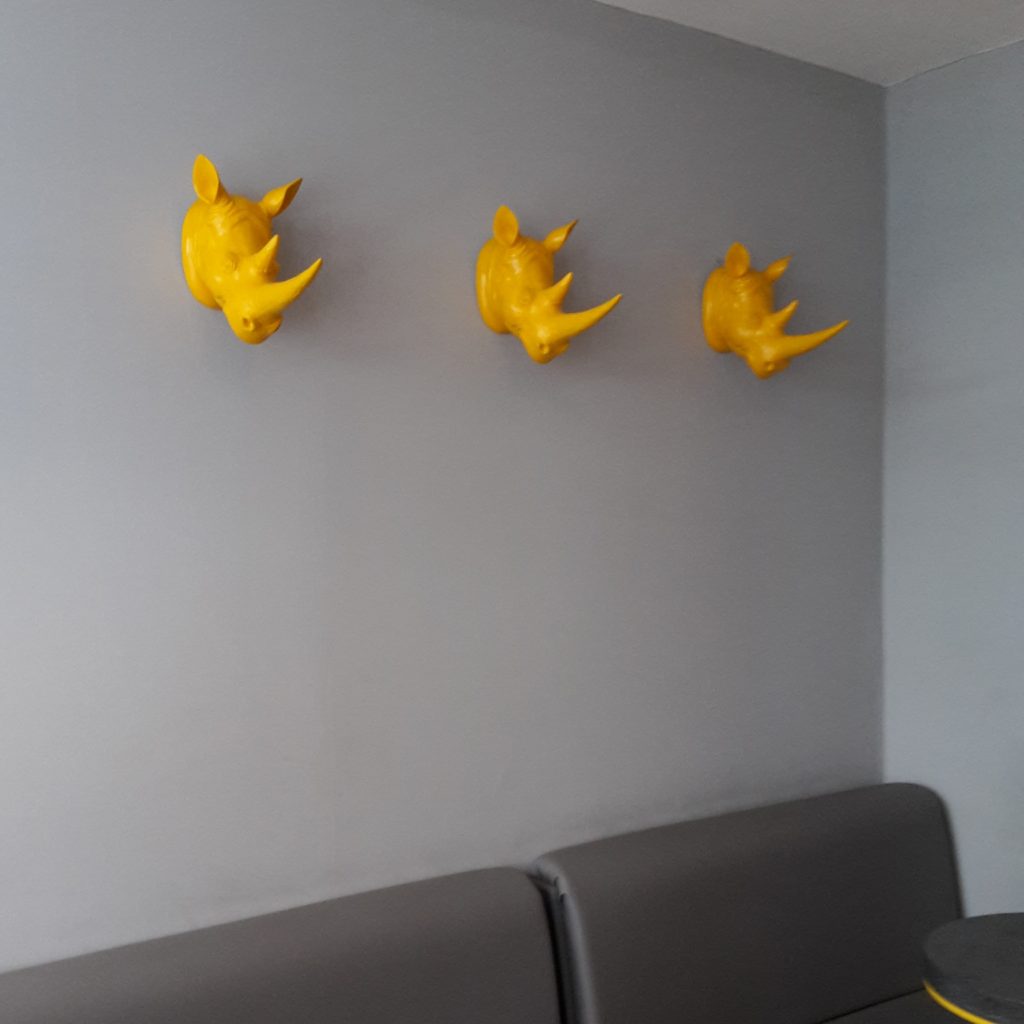 And the decor, OH the decor! Being a massive interiors lover, I was delighted to find the cafe decked out in combinations of grey and yellow which if you’re a reader of the blog you’ll know I love. It is modern but warm, the perfect place to hang out with some relaxed music in the background without being pretentious. The staff are polite and friendly and extremely knowledgeable about the products available. 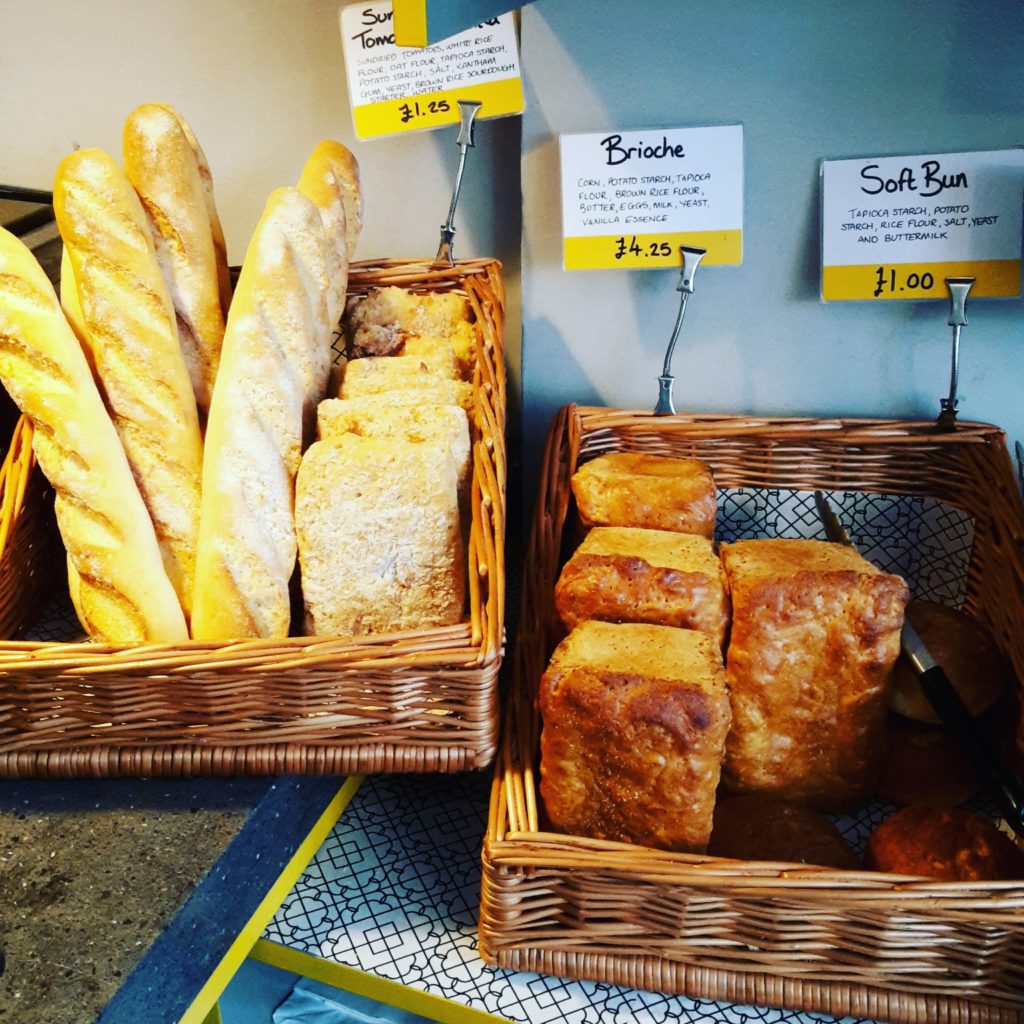 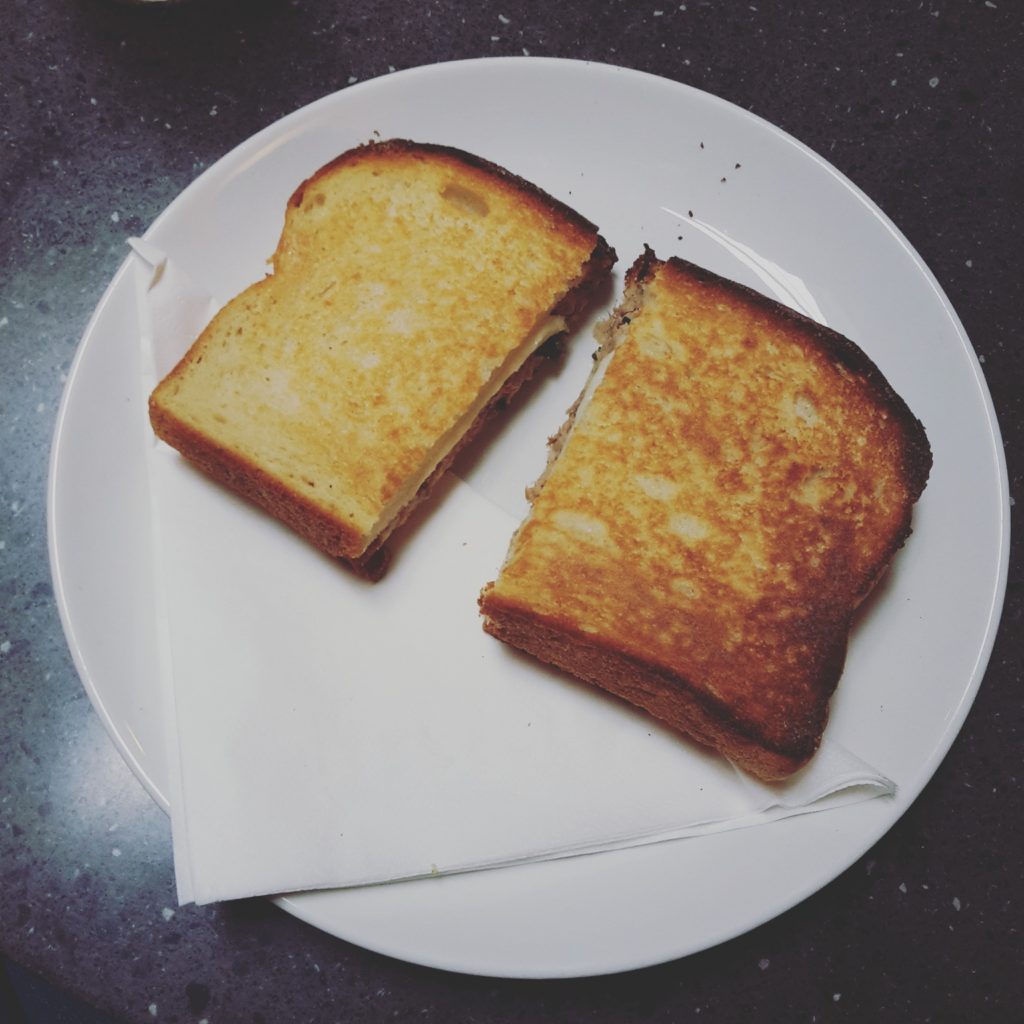 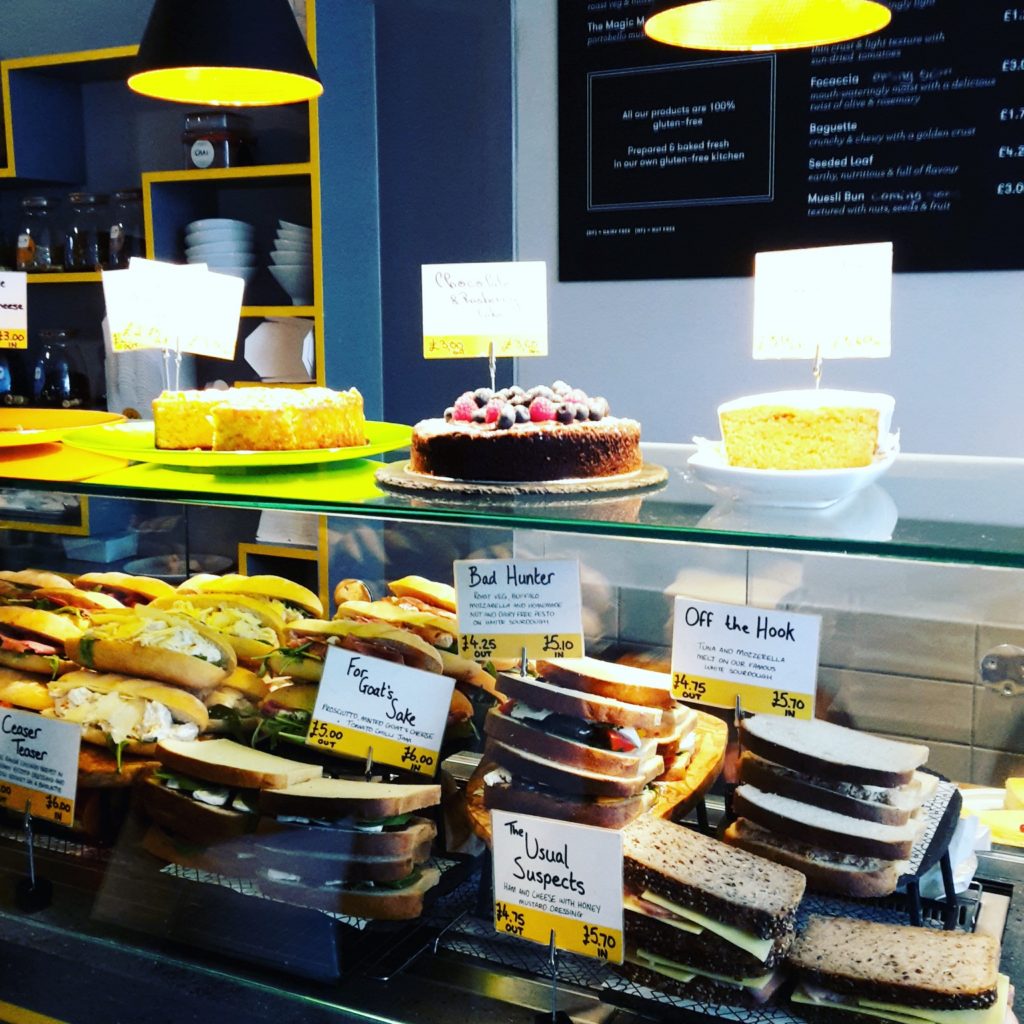 Onto the food. After months of having no bread of any description I felt entirely spoiled for choice. Sourdough and baguettes to take away nestled invitingly in wicker baskets. Bloomer-bread sandwiches ready to be warmly squished down into the perfect toasty; smaller open baguettes stuffed full of fresh fillings such as prosciutto, minted goat’s cheese, fresh rocket & tomato chilli jam. There was also a huge array of sweet treats including scones, Danishes and brownies but I’ve struggled less with finding gluten-free sweet goodies so knew that it had to be a savoury choice. 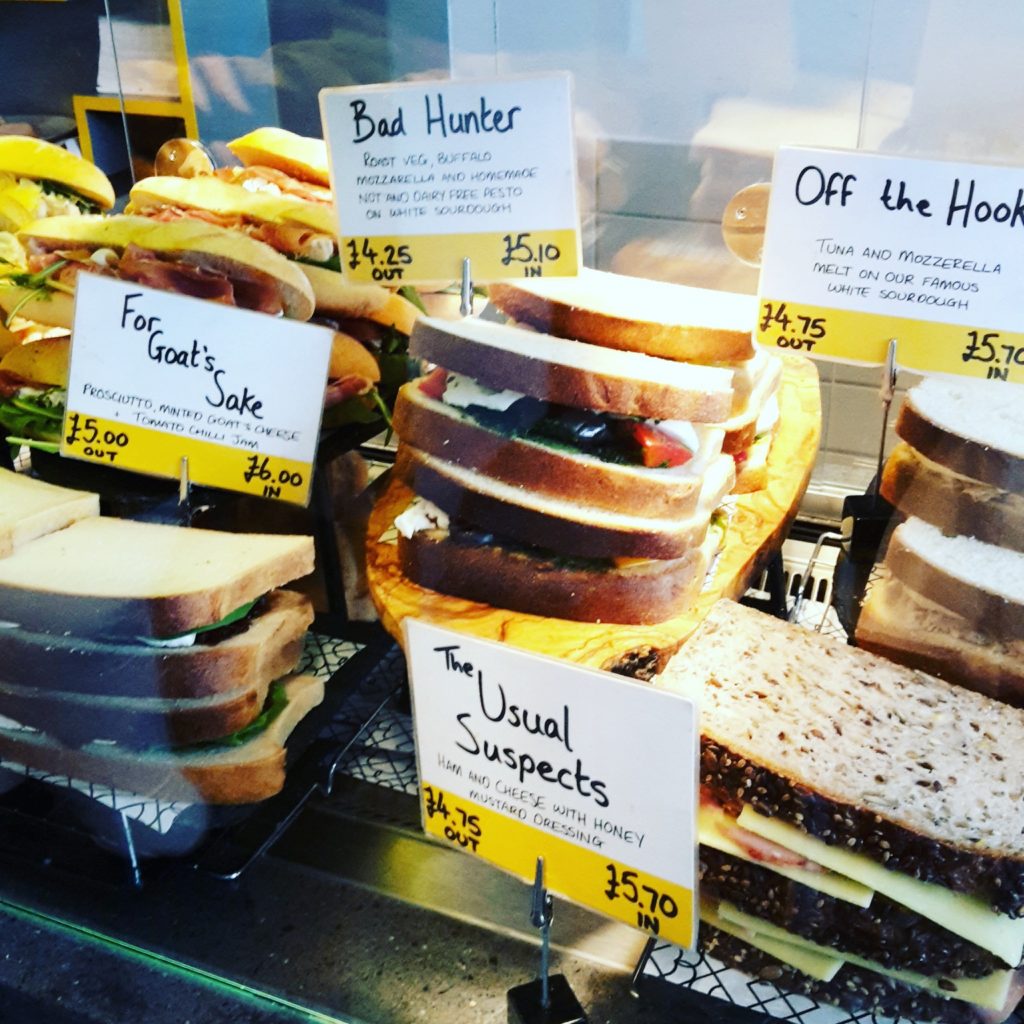 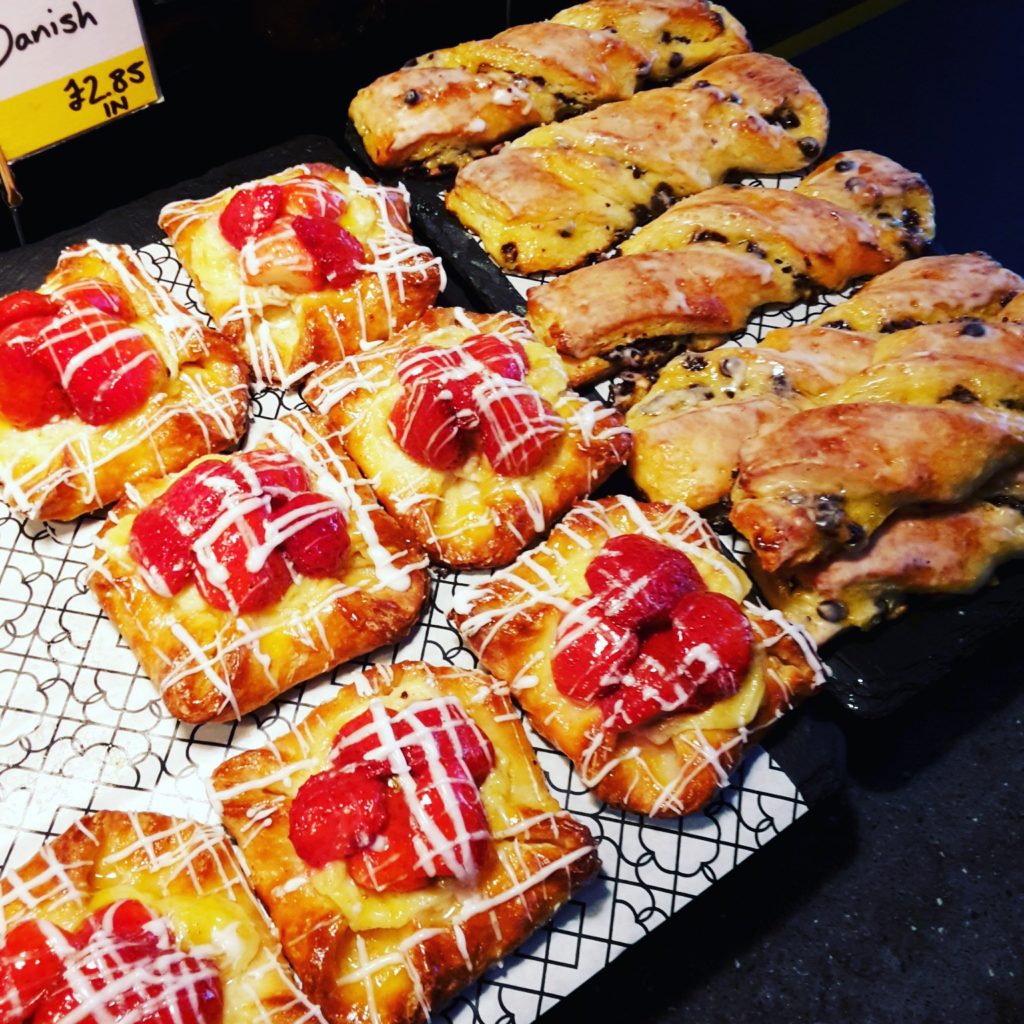 After much deliberation I went for “Off The Hook”, a traditional tuna melt on bloomer bread and it really didn’t disappoint. Full of flavour and bread exactly as I would expect with out a hole in sight and no disintegrating into crumbs either. And you know what? It tasted like bread, not a nutty/banana/courgette/chia seed tribute. Proper. Bread. I could have sat there all day munching my way through the entire menu but instead we took some goodies home with us including a baguette, a chocolate custard Danish, a strawberry Danish and a sultana scone. There were also some great-looking brunch options on the menu as I enviously eyed up a neighbouring table.

Beyond Bread has really answered all my prayers – I’m not about to throw myself back into a bread-based diet because I’m now passed the point of missing it but it’s great to know there’s somewhere on my doorstep where I can really indulge at times where only a sandwich will do. Another branch is opening soon in Islington and with any luck maybe I could persuade them to head down here to London Bridge and take up residence…

This is not a sponsored or collaborative post and I was not asked to write it. I’m just a girl wanting to share the things she loves.