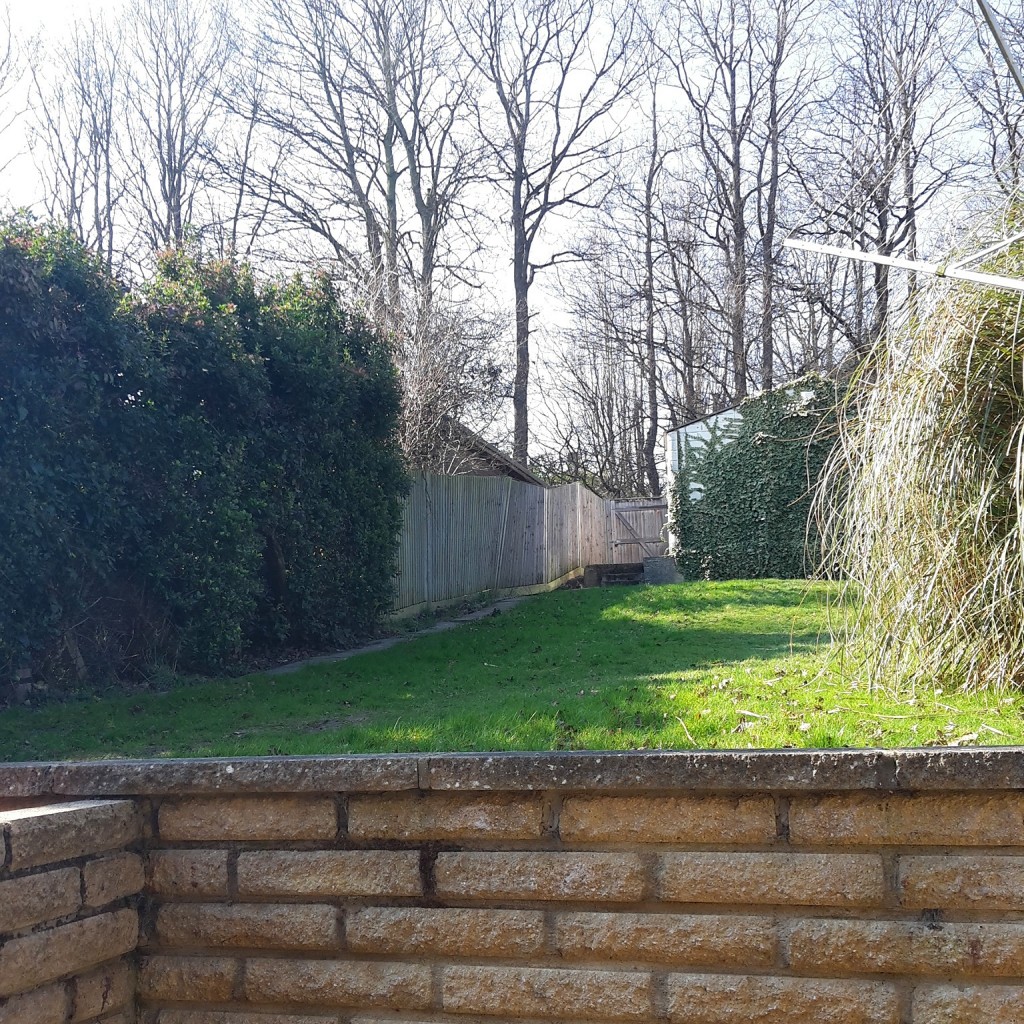 At the bottom of our garden, we have a garage. Correction – at the top of our garden we have an outbuilding. In fact I really don’t know what it is, or where it is but we have a something. Our back garden slopes up away from the house with a large patio behind the dining room and kitchen and steps up to the lawn which then slopes all the way up to whatever-it-is at the back of the garden.

As with a lot of 1930’s houses especially those that would have been built in almost countryside before being swallowed up into cities, our garden is long but narrow and the garage wasn’t always there. I’m obsessed with the history of where we live and wish I could find more pictures. Our neighbours bought their house in the early 90’s from the original 1930’s owners and she said it was a treasure trove of a bygone time and at one point all the gardens had air-raid shelters in them.

Little by little, most people have added some kind of structure at the bottom of their gardens and if you look out of our top floor bedroom you can see a mixture of workshops, summer houses, greenhouses and sheds. Ours is a solid brick building but in desperate need of razing to the ground and starting over – it even has asbestos on the roof! I don’t even know if it ever was a garage, there’s no evidence of any door big enough to get cars through and although there is an access track along the back of our gardens it’s rarely used.

Currently it’s storage for all manner of things, garden equipment, a lot of my market gear, suitcases, one million boxes of Pete’s that he still needs to sort through. It’s fully powered up, has a carpet on the floor and is easily big enough for two cars plus everything you might want to keep in an outdoor space. There’s also a fully-working sauna tucked into one corner, believe it or not.

We’ve had many discussions about what we ultimately want to do with this space and it’s big enough for us to reconfigure it into a proper large shed for all our DIY and garden bits, a home gym and a lovely summerhouse where we can have a couple of sofas, some bifold doors and decking outside.  BUT if I didn’t have to consider another point of view, the fun I could have. So here are my dreams for a ‘she-shed’ 2 ways, with a little shabby chic help from Chairish

Imagine a space dedicated simply to fun, entertaining and relaxing. I love exploring old stately homes where everything was so labour-intensive and time-consuming but for those who had wealth, it appeared to be one long enjoyable time. I would fill my parlour with this Vintage French Provisional Yellow Brocade Loveseat and wait for my suitors to come and woo me. The reality is that Pete would yell from the bottom of the garden “TEA?” and my illusions of a dashing young man in a billowy shirt would be shattered. All is not lost though, fun could be had with this 19th century fliptop walnut game table and if I really wanted to be alone I’d curl up in the evening, candelabra ablaze and curl up with my vintage copy of Daphne Du Maurier’s Jamaica Inn, one of my favourite novels.

It’s fair to say that neither of us are green-fingered, but if someone is to be found in the garden it’s normally me. We really want to start from scratch and try to fit in as many multi-purpose activities as we can. My she-shed could be my inspiration for creating a garden of our dreams filled with all the useful things I need and I’d use this 19th Century French Rooster Weathervane to plan my layout and planting plans and then fill the beautiful blue and white French enameled porcelain pitcher with blooms that we grow. In my ideal world we’d also have a few chickens and a vegetable patch, trying to sneak a little bit of The Good Life into London living. The eggs would be collected in the pretty Large 1930s French enameled porcelain harvest bowl and then Pete can whip them up into a tasty omelette.

So those are my dreams for a “she-shed” if it ever became a reality. What would you do with yours?

Thank you to Chairish for challenging me to come up with some ideas using their shabby-chic collection.